New discovery about distant galaxies: Stars are heavier than we thought

A team of University of Copenhagen astrophysicists has arrived at a major result regarding star populations beyond the Milky Way. The result could change our understanding of a wide range of astronomical phenomena, including the formation of black holes, supernovae and why galaxies die.

For as long as humans have studied the heavens, how stars look in distant galaxies has been a mystery. In a study published today in The Astrophysical Journal, a team of researchers at the University of Copenhagen’s Niels Bohr Institute is doing away with previous understandings of stars beyond our own galaxy.

Since 1955, it has been assumed that the composition of stars in the universe's other galaxies is similar to that of the hundreds of billions of stars within our own – a mixture of massive, medium mass and low mass stars. But with the help of observations from 140,000 galaxies across the universe and a wide range of advanced models, the team has tested whether the same distribution of stars apparent in the Milky Way applies elsewhere. The answer is no. Stars in distant galaxies are typically more massive than those in our "local neighborhood". The finding has a major impact on what we think we know about the universe.

"The mass of stars tells us astronomers a lot. If you change mass, you also change the number of supernovae and black holes that arise out of massive stars. As such, our result means that we’ll have to revise many of the things we once presumed, because distant galaxies look quite different from our own," says Albert Sneppen, a graduate student at the Niels Bohr Institute and first author of the study.

Researchers assumed that the size and weight of stars in other galaxies was similar to our own for more than fifty years, for the simple reason that they were unable to observe them through a telescope, as they could with the stars of our own galaxy.

Distant galaxies are billions of light-years away. As a result, only light from their most powerful stars ever reaches Earth. This has been a headache for researchers around the world for years, as they could never accurately clarify how stars in other galaxies were distributed, an uncertainty that forced them to believe that they were distributed much like the stars in our Milky Way.

"We’ve only been able to see the tip of the iceberg and known for a long time that expecting other galaxies to look like our own was not a particularly good assumption to make. However, no one has ever been able to prove that other galaxies form different populations of stars. This study has allowed us to do just that, which may open the door for a deeper understanding of galaxy formation and evolution," says Associate Professor Charles Steinhardt, a co-author of the study.

In the study, the researchers analyzed light from 140,000 galaxies using the COSMOS catalog, a large international database of more than one million observations of light from other galaxies. These galaxies are distributed from the nearest to farthest reaches of the universe, from which light has traveled a full twelve billion years before being observable on Earth.

According to the researchers, the new discovery will have a wide range of implications. For example, it remains unresolved why galaxies die and stop forming new stars. The new result suggests that this might be explained by a simple trend.

"Now that we are better able to decode the mass of stars, we can see a new pattern; the least massive galaxies continue to form stars, while the more massive galaxies  stop birthing new stars,. This suggests a remarkably universal trend in the death of galaxies," concludes Albert Sneppen.

The research was conducted at the Cosmic Dawn Center (DAWN), an international basic research center for astronomy supported by the Danish National Research Foundation. DAWN is a collaboration between the Niels Bohr Institute at the University of Copenhagen and DTU Space at the Technical University of Denmark.

The center is dedicated to understanding when and how the first galaxies, stars and black holes formed and evolved in the early universe, through observations using the largest telescopes along with theoretical work and simulations. 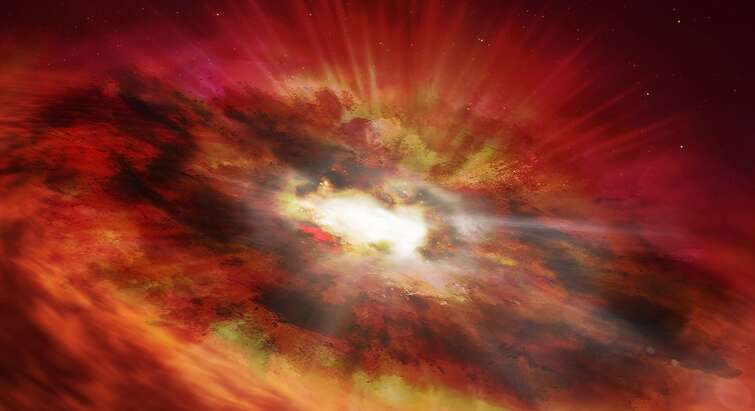