A 2,700-year-old cuneiform tablet from ancient Iraq describing medical treatments has suddenly revealed a secret – a hitherto overlooked drawing of the demon that the ancient Assyrians thought caused epilepsy. It is the earliest illustration of a demon that can be associated with epilepsy.

When Assyriologist Troels Pank Arbøll was studying a 2,700-year-old cuneiform tablet with ancient medical treatments at the Vorderasiatisches Museum in Berlin four years ago, he accidentally discovered a partially damaged drawing on the reverse of the tablet. A drawing that, on closer inspection, turned out to be a demon with horns, tails and a snake’s tongue which, according to the text, was the cause of the dreaded illness Bennu-epilepsy.

Assyria was an ancient kingdom and later empire on the river Tigris in the fertile part of present-day northern Iraq. Assyria was named after the city of Assur, located approximately 100 km south of the Iraqi city of Mosul, as well as the main deity Ashur. Assyria is one of the earliest civilisations, and the history of ancient Assyria dates from approximately 2000 to 612 BCE.

The text, which Troels Pank Arbøll has studied, is written in a dialect of the now extinct Semitic language Akkadian. It was written in cuneiform, where the signs represent entire words as well as sounds in a system reminiscent of Egyptian hieroglyphs. They were pressed into clay tablets with a reed stylus. Therefore, texts may be subject to interpretation because the signs can be ambiguous.

Troels Pank Arbøll has read and interpreted the original clay tablet at the Vorderasiatisches Museum in Berlin. It was here that he discovered the hitherto unnoticed drawing of the demon.

"We have known for a long time that the Assyrians and Babylonians regarded diseases as phenomena that were caused by gods, demons or witchcraft. And healers were responsible for expelling these supernatural forces and the medical symptoms they caused with drugs, rituals or incantations. But this is the first time that we have managed to connect one of the very rare illustrations of demons in the medical texts with the specific disease epilepsy, which the Assyrians and Babylonians called Bennu, explains postdoc Troels Pank Arbøll. He adds:

"Drawings of supernatural powers are very rare on cuneiform tablets with magical and medical treatments. When there is a drawing, it usually depicts one of the figures that the healers used in their rituals, not the demon itself. But here we have a presentation of an epilepsy demon as the healer who wrote the text must have imagined it.

Bennu-epilepsy, which is one of the diseases described in the 2,700-year-old text, was feared in ancient Iraq; symptoms included seizures, loss of consciousness or sanity, and, in some cases, the patients cried out like a goat.

"The text also states that the demon acted on behalf of the lunar god Sîn when it inflicted a person with epilepsy. So the Assyrians and Babylonians believed that there was a connection between the moon, epilepsy and insanity. In the following millennia, this idea became widespread, also in our part of the world, and it can still be detected in the English word 'lunacy'. In other words, the views on illness, diagnoses and treatments in the earliest civilisations have had a significant impact on later perceptions of illness, even in recent history, "says Troels Pank Arbøll.

Troels Pank Arbøll has recently published an article about his findings in Journal des Médecines Cunéiformes. His research is supported by the Edubba Foundation. 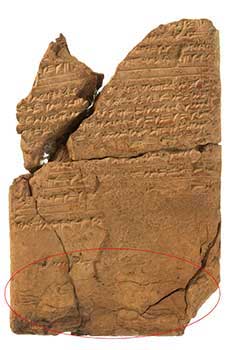