A seemingly harmless concussion can cause the loss of a job - especially for patients who are in their thirties and for those with a higher education. According to a large new study, these patients have a much higher risk of being without regular employment five year after the incident.

A hard tackle in football, a crash on your bike or a fall from a ladder in your home can easily cause a concussion, which eventually can cost your job – especially if you are in your thirties, and have a higher education. These are some of the findings in a large new register-based data research study from a team of researchers at the University of Copenhagen led by PhD student in Public Health, Heidi Graff, and neuropsychologist Hana Malá Rytter from the Department of Psychology.

Each year 25,000 people are diagnosed in hospitals with concussion (mild traumatic brain injury) that make up roughly 90% of all injuries causing trauma to the head. Although mortality is low, and surgical intervention rarely required, up to 15% of patients suffer from persistent symptoms and functional impairment following the injury, that may have severe personal costs and often make it hard to resume their normal jobs and lives.

The Danish study includes all groups of patients and is representative for the general population in Denmark in terms of age, geography, education, family background and marital status.

Using register data from 19,732 Danes between the ages of 18 and 60 that were all diagnosed with a concussion, researchers traced the patients’ attachment to the labour market during five years and compared the data to an equally sized control group of people without concussion.

They found that people with concussion have a markedly higher risk of being out of a job five years after the trauma.  Instead they are unemployed, receiving payments due to disability or early pension or working part-time supported by social benefits.

Especially two groups of patients were severely struck by long-term symptoms: Those in their thirties and those with a higher education.

The researchers did not examine the patients physically or screen their medical records to assess the patients´ medical symptoms following the concussion. They merely looked at their labour market data six months and five years after the head trauma respectively. Accordingly, they were surprised to find out that people between the ages of 30-39 and those with a higher education are much more likely to have lost their connection to a normal job following a concussion.

- It is surprising, that the effect of a concussion has such severe consequences for this group of people and their ability to maintain a normal job even five years after the trauma. Long-term symptoms like fatigue and difficulties in concentrating can of course afflict anyone regardless of their level of education. What stands out is that those with a higher education are in such higher risk of losing their job. It could be due to the fact, that they often hold jobs where they plan and prioritise their tasks and the workload by themselves, and that the mental surplus and overview required to do so are some of the skills that are often severely impaired in the aftermath of a concussion, explains Hana Malá Rytter, Associate Professor in Neuropsychology at the University of Copenhagen and Head of the Danish Concussion Center.

Not able to do the same

Even though it might sound like a great advantage to be able to plan your workday yourself whilst recovering from a head trauma, it is in fact often an advantage for these patients, if someone else takes charge and hands out simple, well defined job tasks to be completed one at a time. This may be one of the reasons, why researchers find that people with low education levels are better able to keep their job.

- People with higher education often hold positions, where they are required to multi-task, engage in teamwork and shift focus between different tasks while making decisions and taking responsibility. Skills that are often challenged, when long-term symptoms after concussion impair the ability to concentrate. Our data indicate that part of these patients must face that they simply are not able to do the same, as they used to before, says Hana Malá Rytter.

The study is the first register data-based study that analyses patients’ labour market activity up to five years after a concussion, and it is the first study to reveal what specific groups of patients are affected the most in terms of their employment status in the aftermath of a concussion.

Worst for the 30-somethings

The researchers also identified another specific group of patients that were markedly more at risk of leaving the labour market following a concussion: People between the ages of 30-39. Data showed that their risk of having left a regular job five years after a concussion was twice as high, compared to people of the same age in the control group without concussion. According to Hana Malá Rytter, this may have to do with the life situation in which people in their thirties often find themselves.

- Men and women in their thirties have often completed their education a few years earlier and are just establishing themselves in their professional life and as a family too. In this phase of life, people often make high demands on themselves both in and outside their workplaces. Moreover, becoming parents is a challenging and stressful process for young families. Expectations regarding the capacity of the individual are often towering - both from employers, colleagues, family members and from the individuals themselves. So once they are struck by long-term consequences of a concussion that often reduce their mental surplus and their ability to focus. Their whole life situation suffers so much harder, than if this happened later in life. And this seems to make some of them give up on their job, explains Hana Malá Rytter.

- Senior professionals may have a more relaxed attitude to what they are supposed to accomplish in life in general and in their professional career in particular. From other studies we also know that it is easier to adjust to a long-lasting disease, if this happens later in life, says Hana Malá Rytter.

According to Hana Malá Rytter, patients should receive better and more precise advice from both doctors, nurses and other professionals in the health and social care system following a concussion. It is important that the patients’ entire life situation is being taken into account.

Patients with concussion rarely receive actual treatment, as the brain primarily needs time and rest in order to heal. In general, patients are advised to merely go home and take it easy for a few weeks - and to pay attention to what level of activity they feel they are able to handle. And that can create a false expectation that they are soon back in business.

- It differs greatly how much activity people expect of themselves, and health professionals need to draw attention to the cognitive and mental limitations that often strike the young professionals and those with higher education in the wake of a concussion. They need to be told, that this may take many weeks or even months, before they can expect to be back at full speed in the way they were prior to the head trauma. If not, they may strain their mental capacities and that can delay the healing of the traumatised brain, explains Hana Malá Rytter and continues:

- Furthermore, they may experience defeat, when the exhaustion causes symptoms to worsen again and they have to give up. This can cause stress and we know from other studies that this will delay the healing process.

The researchers also identified two other groups that are at particular high risk of losing attachment to the labour market: Patients with chronic diseases (i.e. diabetes, heart- or liver disease or AIDS) prior to the concussion, and patients that were of non-Danish origin. This is not surprising, as plenty of research points to the fact that chronic disease in itself has a very negative effect on a person’s perceived life quality. In addition, being part of a minority group is linked to a series of problems that increase the risk of early retirement and receiving disability payment.

Facts about the survey 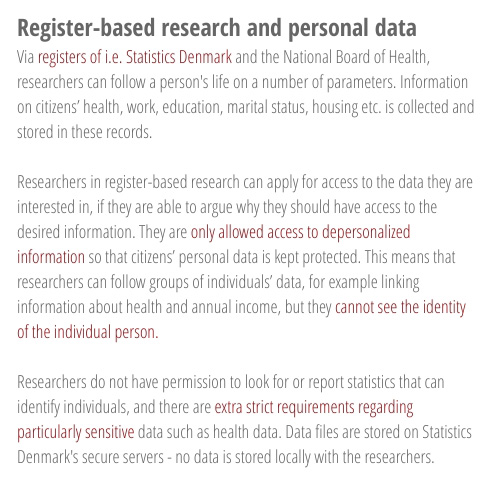