When biologists and doctors have to examine the smallest parts of a cell, they need to take accurate 3D pictures. However, this is often difficult for a particular type of image, but researchers from the Department of Computer Science at the University of Copenhagen have found a method to correct it and make the biologists' work easier.

In 2017, PhD student Hans Stephensen participated in an event* with researchers from different disciplines, all of whom worked with biological images. He fell into conversation with a biologist who had problems with a certain type of biological images that are used to examine the smallest parts of the body's cells and the processes they are part of.

The images were the so-called volume images, which are taken with an electron microscope. Such images often end up being skewed, leading to sources of error in biologists' research findings, which depend on correct measurements of shapes and angles of cell parts.

- It was not something I had intended to become a project, but out of interest I asked her how she went about correcting the pictures. She did this by looking at some small cell particles in the image and changing the skew manually, rather than using an automatic computer method. Afterwards, I could not let go of the idea that there had to be a better way, says Hans Stephensen.

The problem with volume images has to do with the electron microscope itself, which, unlike a regular microscope, creates images from electrons rather than light. Electron microscopes are used, among other things, to examine differences between healthy cells and diseased cells in serious diseases such as ALS, Huntington's disease, and Alzheimer's. 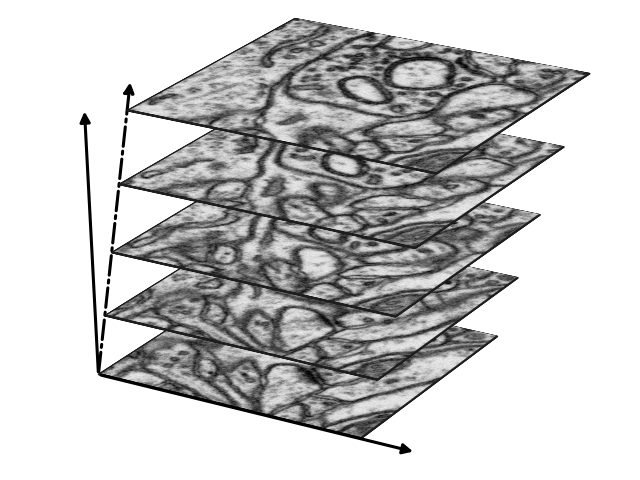 However, because the electrons in the electron microscope are attracted to different charges, volume images often end up being skewed.

- Each time a new image is taken for the stack, the image will have moved slightly compared to the previous one. This is a big problem when biologists, for example, have to measure the shape of the cells because the cell parts will be skewed or stretched in the resulting image. It will give errors in almost every way to measure the shape, Hans Stephensen explains and continues:

- The smaller images we work with, the more challenges we find. There are various standard methods for correcting images, but they do not work optimally for volume images, where the images are on an extremely small scale - all the way down to nanometres and at the limit of what is at all possible.

Information from the cell itself can correct the skewness

Hans Stephensen, together with Professor Jon Sporring and Associate Professor Sune Darkner, has therefore found a new solution, namely to use information from the cells themselves to correct the images.

Inside all cells, there are some tiny, spherical particles called vesicles, whose job is to transport various substances (hormones, neurotransmitters, etc.) either locally inside the cell or out of the cell to the blood. If you look at the skews of the vesicles in the images, you can use that information to find out how skewed the 3D image is.

- Imagine a whole family of spheres inside a cell, all of which look a little different. We found that when we measure the skew of each of these small spheres and find the average of it, it will correspond to how skewed the image is and how much we need to correct the image. With that knowledge, we have created a mathematical model that can be used to calculate the skew, which makes it possible to correct the volume images, says Hans Stephensen.

However, the method is not limited to a specific type of research, and it can be used freely by anyone who needs to correct skewed 3D images - as long as they can spot a spherical object.

- You can use our method if you have a known object in your images, which must be spherical. If the image is skewed, the spheres will also be skewed, and then you can use the spheres to correct it again, says Hans Stephensen.

*The event was arranged by Center for Stochastic Geometry and Advanced Bioimaging (CSGB).

The result was published in the peer reviewed Nature journal Communications Biology. Download the paper here.