New center to replace oil and gas with sustainable chemistry

The chemical industry requires new technologies as they phase out oil and gas in the years ahead. Catalysts made from so-called ‘high-entropy alloys’ may be the key to chemistry based on renewable energy. In line with both demand and technological promise, University of Copenhagen researchers have been awarded a grant from the Danish National Research Foundation for a new center where future generations of these alloys will be studied. 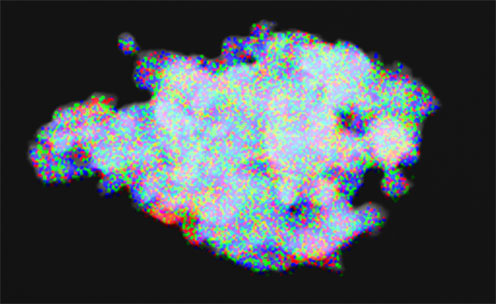 Many of the things that surround us are chemically derived from fossil gas and oil - from washing powders to phones to pharmaceuticals. As such, chemistry contributes to CO2 emissions in the same way as, for example, flying does.

"It is a problem that the fuels and chemicals we use to produce plastics and pharmaceuticals today are based on oil and gas. We need to find alternative chemical reactions and new catalysis based on renewable energy sources to secure a green transition. High-entropy alloys open up new avenues for what we can achieve," says University of Copenhagen chemistry professor Jan Rossmeisl.

Along with three other researchers, Rossmeisl has just received a 61 million kroner grant from the Danish National Research Foundation to establish a center that will study catalysis on high-entropy alloys.

High-entropy alloys consist of five or more different elements that can be randomly combined in millions of possible ways. Theoretical evidence suggests that some of these combinations may espouse optimal properties to act as catalysts. Now, researchers would like to look into whether theoretical promise can be translated into practice to produce high-entropy alloys that work as effective catalysts.

"This complicated alloy presents entirely new opportunities for rethinking chemistry due to the far greater abundance of possible surfaces, as it is on these surfaces of these alloys where catalysis takes place," explains Jan Rossmeisl.

Even though high-entropy alloys are a new field of research, a great amount of attention is being paid to them internationally. Researchers suspect that this new generation of alloys can make existing chemical processes more sustainable and that they will make entirely new chemical reactions possible. Among other things, this will contribute to the development of sustainable chemistry.

Jan Rossmeisl is particularly hopeful that, within the next few years, the new center will find an alloy capable of combining carbon and oxygen containing molecules to produce important and valuable chemicals.

Because high-entropy alloys consist of many millions of possible configurations, it is a time-consuming job to identify which of these combinations have useful properties and furthermore, how to control the formation of precise combinations.

The center's work will be vital in advancing knowledge of the principles of an effective high-entropy alloy catalyst.

"In six years, we will certainly know much more about high-entropy alloys, and hope to be able to propose a few materials for catalysts that will contribute to sustainable chemistry," says Rossmeisl.

The new center is called: The Center for High Entropy Alloys Catalysis (CHEAC). The Danish National Research Foundation has granted 61 million kroner to support the center over a six-year period, with the possibility of an extension.