A group of scientists at the Niels Bohr Institute (NBI), University of Copenhagen, has figured out how to make spin qubits perform controlled backward rotations. This has never been shown before – and the journal Physical Review Letters, where the research has just been published, highlights the innovative discovery in the category 'Editor's Suggestion'. 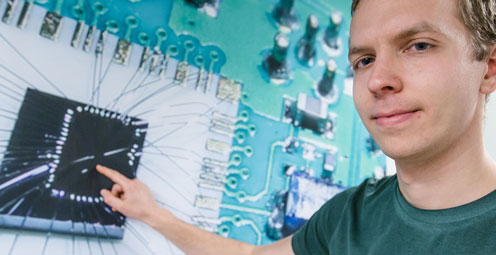 Filip Malinowski – pointing at a chip similar to the one which the NBI-scientists used in their experiments in order to put qubits into reverse. Photo: Ola Jakup Joensen

"I guess you can say that we have figured out how to run the qubits in both forward and reverse gear – under certain circumstances", says Ph.D. Filip Malinowski, Center for Quantum Devices (QDev) at the Niels Bohr Institute.

Malinowski and QDev colleague Frederico Martins – who is now with the University of New South Wales, Australia – spearheaded the 'reverse project' which also included scientists from Purdue University, USA. The American scientists' role involved the production of extremely pure semiconductor crystals, which the NBI team needed as a foundation to build upon when putting together the specific 'environment' needed to force qubits into reverse.

The NBI discovery should be seen in the context of quantum computers, the new and powerful next generation super computers that scientists all over the world – QDev being no exception – aspire to develop through various projects. 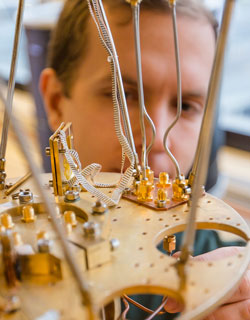 The cryostat used for the experiment. This equipment was needed to carry out the experiments just above absolute zero. Photo: Ola Jakup Joensen

In order to build a quantum computer you need qubits – and qubits differ from binary bits which are the backbone of contemporary computers. Binary bits can assume the values 0 or 1 and therefore – in principle – function as switches: they are either 'on', or they are 'off'.

Like classical bits, qubits can assume the values 0 and 1. However: qubits can also be in a state which represents 0 and 1 simultaneously, a so-called superposition.

“We encode qubits in the direction that the electron spin is pointing - and process quantum information by rotating spins around different axes. Theoretically, forward and backward rotations yield different superposition states, but experimentally only forward rotations were possible up now”, says Frederico Martins.

The fact that qubits can be in a superposition state is what will enable a quantum computer – once it has been developed – to simultaneously undertake a truly large number of different calculations.

In order to carry out qubit research you have to work at very low temperatures – in the vicinity of absolute zero (-273.15 C) – the reason for that being that these conditions shield the qubits from various disturbances which may affect their level of performance, e.g. noise.

"Our experiments were conducted at just 0.02 C above absolute zero. We were able to create this very low temperature thanks to special equipment in the QDev lab – a version of a cryostat, a so-called dilution refrigerator", explains Filip Malinowski:

"And when a quantum computer is eventually developed, it will most likely also include some version of a cryostat". 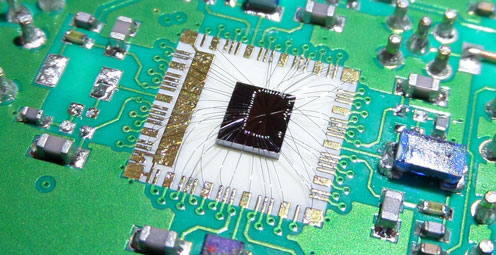 The black square – measuring roughly 3x3 millimeter – is a semiconductor chip similar to the one which the NBI-scientist used in their experiments. The chip sits on a printed circuit board. Photo: Filip Malinowski

What are the possible practical implications of the fact that you can now force qubits into reverse – as shown by the NBI scientists?

For one it makes it possible to carry out faster calculations of a given quantity of data than can be done relying on qubits equipped with just one – forward – gear.

But it is also possible to choose precision over speed by letting the 'reverse qubits' work at a moderate pace in a – future – quantum computer. In that case the advantage will be calculations of increased precision, tells Filip Malinowski: "And as a consequence you will be able to avoid a lot of errors that would have to be corrected through additional computation".

In order to understand just how much easier it suddenly becomes to control qubits once they have been supplied with a reverse gear, an analogy involving a car comes in handily, says associate professor Ferdinand Kuemmeth, head of the QDev team behind the discovery:

"Imagine that you drive a car along a crowded street – the street where you live – and you wish to park it exactly in front of your door. This can be a daunting task, especially if there are a lot of cars – (noise, when we are talking qubits) – around you. And now imagine doing this without a reverse gear: If you overshoot slightly, you missed your chance, and it's hard to come up with a fix. The same is true with rotating qubits: If one overshoots slightly – which frequently happens due to the noisy environment – there was no way to rotate the qubit back – until now!" 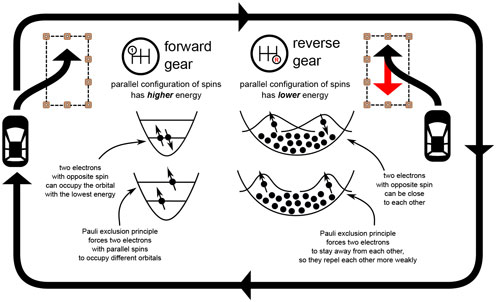 Precise qubit manipulations have many similarities to parking a car in a small parking place: With forward gear only any mistake can be corrected, but at significant cost - like driving a car around the block to try again. On the other hand with a reverse gear one can simply do fine adjustments by driving back and forth a little bit.

In the work of NBI scientists the forward gear indicates that two parallel electron spins have higher energy than electron spins pointing in the opposite directions. Meanwhile on the reverse gear the parallel spin configuration has lower energy.

Usually the two spins confined in the small space have low energy if they are pointing in opposite direction. That is because they can occupy the lowest orbital - like two electrons in an helium atom. Meanwhile the Pauli exclusion principle forbids two electrons to occupy the same orbital if their spin is the same. This forces the second electron to occupy another orbital, increasing its energy.

However, the situation changes when the two spins are floating in a pool of many other 'neutralized' electrons. Then the Pauli exclusion principle forbids the electrons with spins pointing in the same direction to be floating close to each other. Therefore two negatively charged electrons with parallel spins repel each other more weakly, than if their spins were opposite. All in all, weaker repulsion decreases the energy of parallel spin configuration.

In general these two effects coexist and compete. The NBI scientist demonstrated that it is possible to switch between configuration in which the former or the latter effect dominates.

The reverse function in qubits has been demonstrated in an experiment involving a quantum 'environment' which the NBI scientists built on top of a tailor-made crystal – a sandwich-like structure delivered by Purdue University, made out of a material with extraordinarily uniform distribution of electrons.

At the base of the 'environment' is the crystal structure – which the NBI scientists covered with a polymer.

The next step was 'drawing' a pattern of grooves in the polymer layer, using a beam of electrons.

Then the – now weakened – polymer was flushed away from the indicated pattern – laying the grooves open, like ditches.

Finally the grooves on top of the crystal were filled with a metal to form electrodes, of which the smallest measured a mere 20 nanometer – and by applying different voltages to these electrodes it is possible to repel or attract electrons, ultimately placing individual electrons in specific positions.

The NBI scientists used such a chip to accurately control the so-called exchange interaction – a fundamental interaction between electrons that can be used to force qubits into reverse – and how this is done is explained in more detail in the news graphic.

The condensed explanation centers around the fact that when two electron spins – one pointing upwards, the other downwards – are placed in the same confined space, they start rotating together, says Filip Malinowski:

"In this case these electrons are qubits – and if we return to the car analogy, they will start rotating or moving forward. Until now the assumption has been that this was indeed the only direction in which they could possibly move – which is where our discovery comes in".

The reverse function becomes reality when two oppositely pointing electron spins – qubits – are placed in a confined environment together with a lot of other electron pairs.

Gallium arsenide – the material which the US-produced crystal is made of – plays a prominent role in the NBI experiment, but the technique will probably work equally well with a number of other semiconductors, says Filip Malinowski:

"Especially silicon, which is essential to the chips found in our present generation processors – but silicon could also be used as a building material for quantum computers".