Primary cilia are antenna-like structures that are present on the surface of most cells in the human body. The cilia are essential mediators of communication between the different cells in the body. If the cilia are defective, this communication is disrupted, and the cells are unable to appropriately regulate several important cellular processes, which ultimately can lead to severe diseases that may affect nearly every organ and tissue in the body, in the developing embryo as well as in the adult.

Image of a cilium from a mouse cell with the cilium stained in blue and Caveolin in red. The base of the cilium is shown in green. From: Schou et al. Nat. Commun. 2017

Research performed in recent years has shown that the ability of these small communicating antennas (cilia) to receive and transmit signals from the environment is critically dependent on transport of specific signaling receptors in and out of cilia. The cilia are found on the surface of almost every single cell in the body, and by constantly monitoring the environment, they control basic cellular behaviors, such as when a cell has to divide or migrate to a different position in the body during embryonic development.

In the developing embryo there is for instance the Sonic hedgehog (Shh) signaling pathway, which is one of the most important signaling pathways in our body that regulates the development of several major organs, such as kidney and brain. Defects in cilia that affect Shh signaling, or mutations in genes that code for Shh signaling proteins, can therefore lead to severe diseases called “ciliopathies” where the kidney, brain and many other organs in the body are defective. In addition, defective Shh signaling has also been shown to cause brain tumors in children and adults.

Despite the physiological importance of cilia for human health and disease, the molecular mechanism by which cilia receive and transmit signals is still not fully understood. A new study from the Cilia Group (Department of Biology, University of Copenhagen), published in Nature Communications, has now provided important new information that may help to resolve this long-time mystery.

- Associate professor Lotte Bang Pedersen from Department og Biology says, ‘In this study, we found that a cholesterol-binding membrane protein called Caveolin (CAV1) is located at the base of the cilium and has a central role in the regulating the cilium’s ability to activate the Shh signaling pathway. And the short version is that we now finally know how extremely complex and dynamic activation of this pathway is – and we have identified a key switch that controls this activation.’

The figure shows the variety of proteins involved in activation of this extremely complex and dynamic pathway, but is also an example of the importance of defining all basic aspects in the cellular mechanisms by which cilia receive and transmit signals. As shown in the figure, activation of Shh signaling depends on ciliary entry of the signaling protein Smoothened and ciliary exit of the Shh receptor Patched1; Caveolin, Nephrocystin-4 and KIF13B regulate this very first step in the pathway. 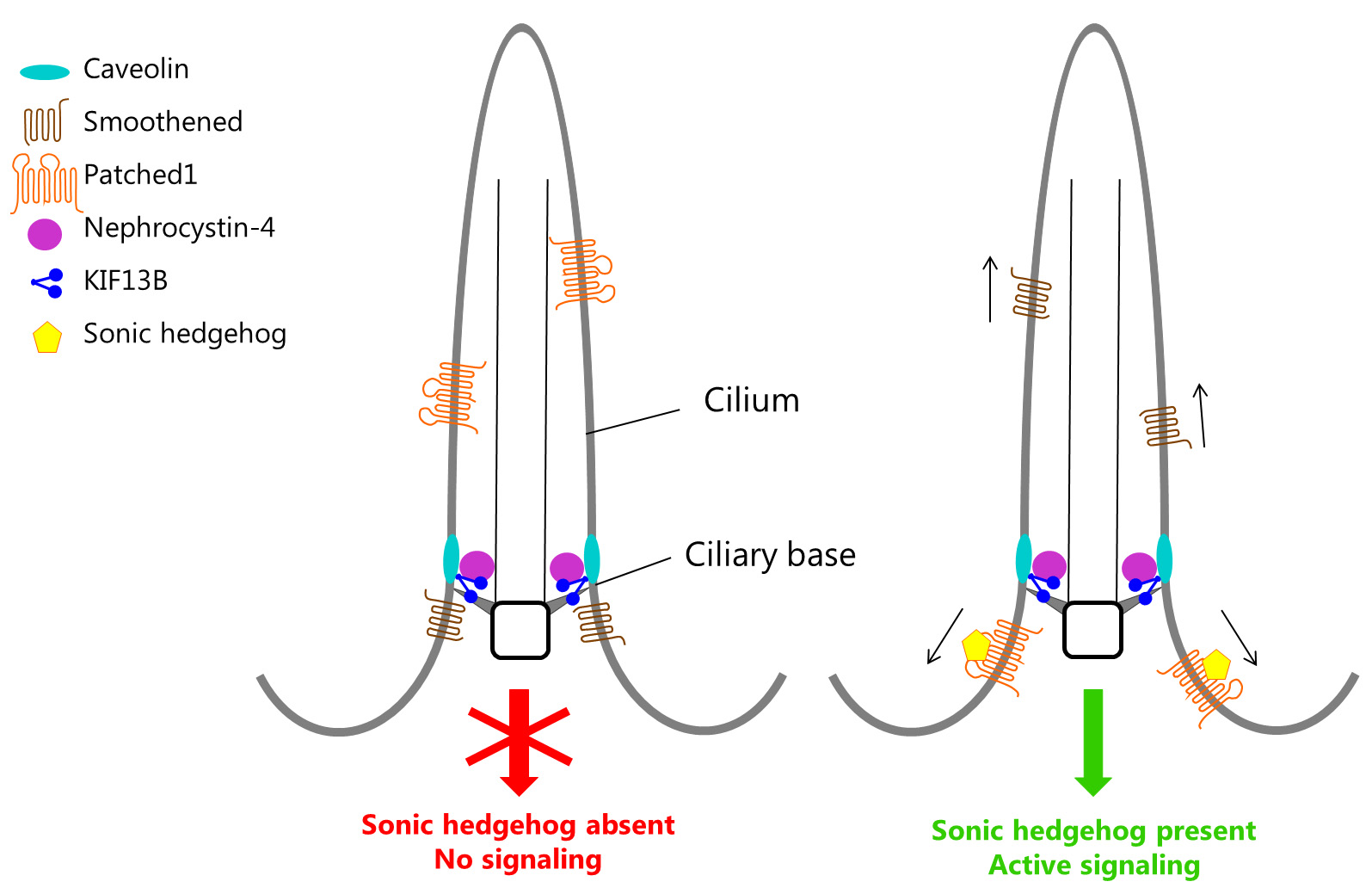 Simplified diagram showing how the cilium regulates activation of Sonic hedgehog (Shh) signaling. Left: when Shh is absent, the signaling receptor Patched1 accumulates in cilia. Right: in the presence of Shh, Patched1 binds Shh and leaves the cilium. This causes another signaling protein called Smoothened to enter the ciliary compartment and activate the signaling pathway. The proteins Caveolin, Nephrocystin-4 and KIF13B are present at the base of the cilium and are required for the Shh-dependent ciliary entry of Smoothened. The diagram is based on Schou et al. Nat. Commun 2017.

While Caveolin is required for activation of the Shh pathway at the base of the cilium, the new study identified two additional proteins - the kidney disease protein Nephrocystin-4 and a molecular motor protein called KIF13B - that are both required for regulating Caveolin at the cilium, and which therefore also contribute to activation of Shh signaling. It was already known that Nephrocystin-4 regulates the cilium’s ability to receive and transmit signals, and that mutations in Nephrocystin-4 cause diseases of the kidney and other organs.

With the new study we are one step closer to understanding the molecular mechanism by which these diseases occur so we can develop better treatments for “ciliopathy” patients in the future. Moreover, with the identification of KIF13B as an important regulator of signaling at the cilium it may only be a matter of time before disease-causing mutations in KIF13B are identified in human patients with cilia-related diseases.

The research is funded by

In this short video Lotte Bang Pedersen explains the recent discoveries about the communications processes in the primary cilium. 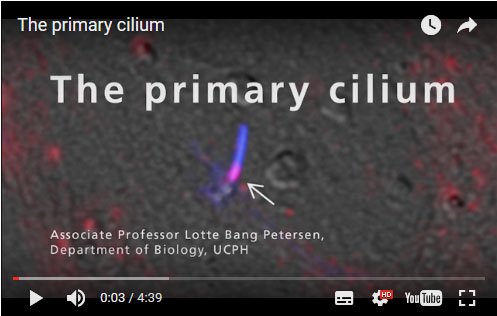