Associate Professor Dereck Chatterton at the Department of Food Science at the University of Copenhagen has spent more than 15 years carrying out research in order to improve infant formula for children who cannot be breastfed. The goal is to improve the health of children by manufacturing and processing infant formula so that it more closely resembles the composition of breast milk. 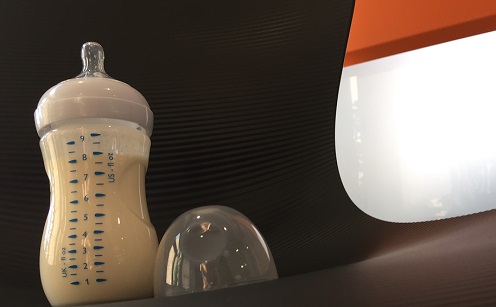 “While infant formula is currently used to good effect when children cannot be breast fed, thermal  processes can change the structure of milk proteins so that the effect of the bioactive compounds are modified, which can lead to some of the proteins losing their effect. When the proteins are ingested, they must be digested in order to release the essential amino acids and bioactive peptides (small chains of amino acids, ed.). We therefore study  the digestion of the proteins in order to understand how they contribute to an infant’s health and how thermal  processes affect the proteins structures and their stability during digestion,” says Associate Professor at the Department of Food Science (FOOD), at University of Copenhagen, Dereck Chatterton.

This research is an example of how there has come to be a greater focus on food processing in relation to health and wellness in recent years, but also of how complex the research has become and how important interdisciplinary collaboration has become.

In 1999, Dereck Chatterton began as the first industrial PhD at Arla Foods Ingredients (AFI), which at that time – as well as today – produced large quantities of cheese whey, which is a by-product of cheese production. The whey was used to isolate the ingredients that are added to infant formula. However, the proportion of protein in these infant formulas was not optimal, because while human breast milk has a protein content of between 0.9 and 1.1 grams per 100 millilitres, infant formula at that time had a somewhat higher protein content of between 1.6 and 1.8 grams per 100 millilitres

AFI wanted to see if they could isolate a protein from the whey, alpha-lactalbumin, which is also found in high concentrations in human breast milk, and whether it could be used to improve the protein composition of infant formula.

“We began to isolate alpha-lactalbumin, which is very rich in essential amino acids. It had to be tested on a laboratory scale and then  at process scale and this took more than four years as we also had to find a mild processing method that would preserve as much of the original protein structure as possible so that it more closely resembled the protein structure in human breast milk,” says Dereck Chatterton.

He spent part of the time in the United States, together with researchers from the University of California, Davis, where he tested infant formula enriched with alpha-lactalbumin in preclinical testing of newborn monkeys. It turned out that the enriched infant formula that now had a lower protein level, could also ensure a more optimal amino acid profile, suggesting that the monkeys who received infant formula had a digestion and absorption of amino acids that closely resembled that of the breastfed monkeys. Furthermore, the enriched infant formula also protected the animals better against infections. Later clinical tests showed that the effects in infants were similarly positive. A new generation of infant formula became a reality – partly based on this research. Infant formula with alpha-lactalbumin has gradually become more in demand and AFI’s production facilities expanded considerably to keep up with demand.

Both the dairy industry and the health and food scientists hope in the future to be able to transfer more of the beneficial effect of human breast milk to another new generation of infant formula, which is why they have isolated other ingredients from  whey and further researched with the aim of getting infant formula to resemble human breast milk to an even greater extent. This research could be beneficial to both infants that can’t be breast fed and babies who are born prematurely. 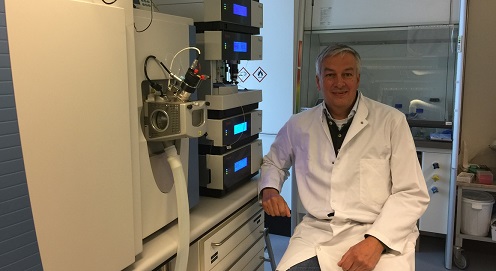 Associate Professor Dereck Chatterton next to the mass spectrometer at the Department of Food Science (FOOD), at University of Copenhagen’s Frederiksberg Campus. Picture: Lene Hundborg Koss

Although breast milk is best for babies born at term, the situation is different with premature babies. Here the production of breast milk is typically delayed and as these babies are also born with low body weight, they have an increased need for growth. Breast milk or alternatively donor milk should therefore be supplemented with infant formula that is specially made for premature children, to increase the protein content of their diet. Therefore it is necessary to carefully align the nutrition for optimal growth and development of the intestinal and immune systems. This is important because both the gastrointestinal tract and the immune systems in children are not fully developed, which also means that they are at risk for developing severe inflammation of the intestinal system.

“Each year, 15 million babies are born prematurely around the world and one million of those babies die shortly after birth from necrotising enterocolitis, a serious inflammation of the intestines. Many of the surviving children have cognitive problems later in life. In order to prevent this intestinal inflammation, early and proper nutrition for the babies is essential,” says Dereck Chatterton.

“Colostrum has been shown to contain important compounds that protect the intestines of premature piglets while it also reduces  pro-inflammatory cytokines, which are a group of proteins that can cause inflammation,” says Dereck Chatterton, who hopes that the research can help reduce the number of children affected by necrotising enterocolitis.

In connection with this research, Dereck Chatterton has worked closely over the last seven years with researchers on various projects led by the Department of Veterinary Clinical and Animal Sciences in the Faculty of Health and Medical Sciences at the University of Copenhagen. The Danish company, Biofiber-Damino A/S, which produces the dried colostrum powder product has also been involved in the projects.

“Together we have tested the effect of colostrum and other dairy products and ingredients on premature piglets in an internationally recognised model,” says Dereck Chatterton.

The dried colostrum powder product has now progressed so far in the process that it is being tested on premature children in China, Australia and several places in Europe – including in Denmark.

In future projects, the researchers will also focus on liquid infant formulas for premature babies, which is easier for hospital staff to use than powdered infant formula.

“The liquid infant formula must be UHT treated and our research will investigate whether some of the proteins that can prevent inflammation are damaged by this kind of heat treatment. We also hope to find out how long liquid infant formula can be stored without the product being damaged,” says Dereck Chatterton.

The effect of UHT treatment will also be tested on new milk ingredients.

“The research will show whether we can reduce the damage caused by UHT treatment through a gentler process that can maintain or improve the ingredients,” says Dereck Chatterton.

In other words, the work to improve infant formula is far from finished and the current research is a complex mixture of cellular studies in test tubes, animal studies and proteomics (advanced protein analysis in the mass spectrometer), which together can reveal the efficacy of proteins in animal and human digestive systems and their influence in the health of infants and premature babies.