Bekzod Khakimov, from the Department of Food Science at the University of Copenhagen, is the first recipient of the Nils Foss Talent Prize. He has a PhD in Metabolomics from 2013 and is continuing building the Foodomics laboratory at the institute as a postdoc. 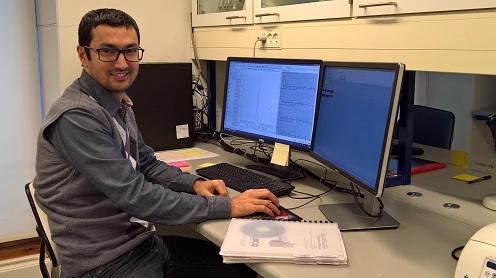 Postdoc Bekzod Khakimov at the Department of Food Science in Copenhagen.

Bekzod Khakimov is one of the most promising young researchers that the Department of Food Science (FOOD) has educated in the last decade. He has published 13 scientific articles in the area of food science, plant science and metabolomics, mostly in highly ranked scientific journals and many more are in the pipeline.

He is both proud and pleased to receive the award.

"Receiving the first Nils Foss Talent Prize was fabulous and surprising news for me and it is the biggest achievement in my career. It makes me feel that our research goes beyond the Foodomics-lab at FOOD and is important both to science and to the food industry. I want to continue working towards establishing myself as an expert in this area and hope to create a research group in the future," says Bekzod Khakimov, who also cooperates with the Department of Plant and Environmental Sciences (PLEN) at the University of Copenhagen.

In order to understand the complexity of food systems, food production and environment, we need reliable analytical systems and efficient data analysis. It is only a matter of time before the methods of Bekzod Khakimov will become standard and lead to considerably more robust and reliable data being produced from the analytical platforms in metabolomics/foodomics.

“Foodomics emerged approximately a decade ago as a new field within the biochemical research area. It covers a broad spectrum analysis of foods, food raw materials and ingredients, and attempts to link food to human health and wellbeing. Foodomics also covers sustainable food production, detection of food fraud and food adulteration, as well as food authenticity,” explains Bekzod Khakimov.

Metabolomics is all about measuring metabolite levels in biological samples to understand their metabolism (synthesis and decomposition in cells) and reveals how internal and external factors (for example the impact of a particular diet) influences the metabolism. The result of a metabolomics study is thus a “fingerprint” of what has happened in the body/biological material. This fingerprint can be used to detect deviations from a given normal state using multivariate data analysis (chemometrics). Three major analytical platforms applied in modern metabolomics are Nuclear Magnetic Resonance (NMR), Liquid Chromatography-Mass Spectrometry (LC-MS), and GC-MS. Illustration: Newlin and Engelsen.

The application of Bekzod Khakimov’s methods has already led to a surprising biomarker that can differentiate people who are on a new Nordic diet from people who are on a traditional Danish diet based on their blood metabolome. He is also working with the German Federal Institute for Risk Assessment with the aim of using his method to detect wine adulteration and food fraud.

Bekzod Khakimov has a background in chemistry and received his BSc from National University of Uzbekistan and MSc from Queen Mary University of London. He has received a PhD degree in Metabolomics from the University of Copenhagen (the Chemometrics and Analytical Technology section) in 2013.

The Nils Foss Talent Prize of DKK 100,000 is awarded to a young and promising scientist. The Prize will be given annually and is the biggest of its kind. Through the Nils Foss Talent Prize, FOSS acknowledges the role of the food and agricultural community in the innovative application of technology for improved value and sustainability in the food supply chain. With the Prize, FOSS wants to further stimulate young and talented researchers in the agricultural and food sector.

"Food is of course an incredibly important research area since the technological research within the food area could help feed the world's population," the chairman of the prize committee, Per Falholt, former EVP Research & Development at Novozymes said to Levnedsmiddelbladet, when the Nils Foss prizes were introduced in October.

Read news about the award ceremony at the FOSS website.