Food scientists: We can detect much more food fraud

Researchers from the Department of Food Science (FOOD) at the University of Copenhagen point out that “non-targeted” methods of analysis can reveal far more food fraud than we are currently detecting. The analytical methods most commonly used today typically only examine a single component of the food and thus can only detect a single kind of fraud. However, by using near-infrared spectroscopy (NIR-spectroscopy), you can take a broad physicochemical “fingerprint” of all the raw materials and ingredients used in food production and use this information to detect whether a particular foodstuff or ingredient has been modified. 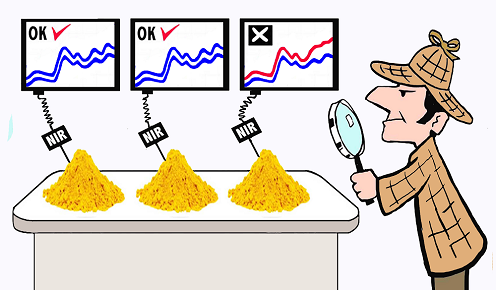 Much more food fraud could be detected by using Near-infrared spectroscopy says researchers from the Department of Food Science at University of Copenhagen. Illustration Sørensen et al.

Researchers from FOOD at the University of Copenhagen have reviewed the use of NIR spectroscopy to detect food fraud in a special issue of the scientific journal Current Opinion in Food Science, which reports on food science innovation. (see "Research facts"-box below).

“The problem is that the food analyses which are predominantly used today are only spot checks and they are typically targeted towards a single kind of food fraud. We would like to move away with this old-school methodology and instead take a “non-targeted” physicochemical fingerprint of the foodstuffs. By using fingerprints and contrasts we can determine whether a given batch of raw materials or ingredients are defective or different compared to the usual,” explains co-author of the article Professor Søren Balling Engelsen, the head of the section Chemometrics & Analytical Technology at FOOD.

The article mentions the case from 2008, where Chinese manufacturers added melamine to milk powder for infant formula, causing 300,000 children to fall ill and 6 deaths. Melamine is a synthetic substance with 66% nitrogen and it was added to the 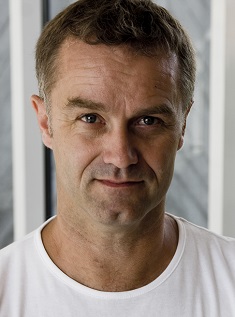 Professor Søren Balling Engelsen from Department of Food Science at University of Copenhagen.

milk powder to make customers believe that it contained more protein than was actually the case and thus had a higher value. The fraud succeeded tragically, because “protein content” was checked using the old Kjeldahl method – a method of analysis that measures the total nitrogen content in the food, which is then equated with the protein content. In this case, the detected substance was not protein, but the hazardous to your health melamine nitrogen.

“Now there is probably no longer anyone who would think about putting melamine in milk powder. An alternative nitrogen-rich substance could be Urea, or in popular terms “piss in the powder”, where nitrogen rich urea is used to fool the Kjeldahl analysis – but not NIR spectroscopy,” says Søren Balling Engelsen.

NIR spectroscopy is already used, but not enough

Another advantage of NIR spectroscopy is that you can examine large quantities of raw materials or ingredients. With spectroscopic monitoring it is possible to examine close to 100% of the ingredients and raw materials that goes into the production, thereby considerably reducing production errors or productions that are of a lower quality than the recipe dictates. (See illustration 1). At the same time, the company can use the method to optimise its consumption of raw materials and to achieve a consistent, environmentally and safe production. 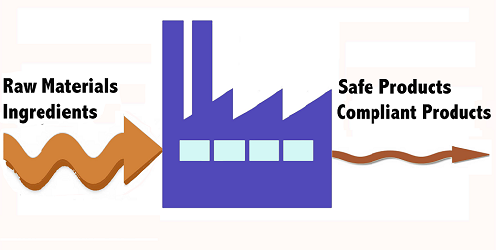 With spectroscopic monitoring it is possible to examine all of the ingredients and raw materials that goes into the production and at the same time optimise its consumption of raw materials and to achieve a consistent, environmentally and safe production. Illustration 1: Sørensen et al.

A good example of a food ingredient that can be manipulated by the suppliers is the desirable gum arabic (E414), which has some valuable properties as a stabiliser, chewing properties and flavour release. Gum arabic is found in Ga-Jol, for example.

“However, it is easy to adulterate food with gum arabic, when it appears in the form of freeze-dried powder, which many suppliers have gradually started to sell. Previously, it was found most often in the form of “tears” from the acacia tree – that is, as large amber-like clumps that cannot be easily forged. But it has been difficult to obtain high quality gum arabic because of the war and unrest in the growing areas (South Sudan). As a powder, it is easy to falsify the gum arabic by mixing an inferior quality with the good and sell it all as being of a high quality. This kind of fraud can also be detected by NIR spectroscopy,” says Søren Balling Engelsen. 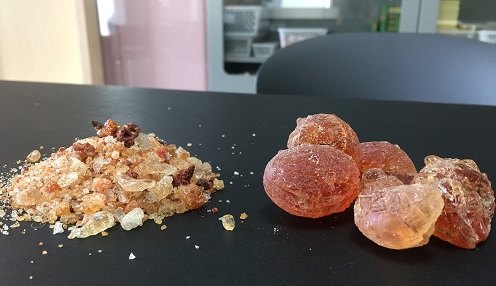 To the right is gum arabic of a high quality in the form of “tears” from the acacia tree Acacia senegal, which has been difficult to obtain at times because of conflicts in the growing areas. To the left is gum arabic of a much lower and more impure quality from the tree Acacia seyal. Gum arabic is used in Ga-Jol, where it provides the unique chewing and flavor release sensation. Picture: Lene H. Koss.

The methods are already being used in parts of the food industry, but according to the researchers it is far from being widespread enough.

“We have known and developed these methods for 20 years and they have become better and cheaper over time. The use of NIR spectroscopy to monitor food quality was already endorsed in the 1970s when Canada began to replace the chemical requiring and cumbersome Kjeldahl analysis with NIR spectroscopy to analyse their cereals for the protein content. For this purpose, NIR spectroscopy is exclusively used as a targeted method i.e. for measuring protein content. But when you want to detect food fraud and food adulteration, you are not looking for a single substance, but have to look broadly. An increased use of NIR spectroscopy will definitely be able to save us from many forms of food modification that could be of more or less serious kinds – from receiving lower quality products to becoming seriously ill,” says Søren Balling Engelsen.

In the article in Current Opinion in Food Science, the researchers defined the following 3 degrees of undesired modifications of food:

Intentional misrepresentation of foods, food raw materials and ingredients, typically with the aim of artificially augmenting the quality of the food item. This include the use of prohibited substances, contamination of the product and other non-compliances to product descriptions. Food fraud includes the melamine example and in many cases can be detected by NIR spectroscopy.

Undeclared introduction of an additional cheaper substance to foods, food raw materials and ingredients with the aim of artificially augmenting the quantity of the authentic food item. Adulteration testing is both qualitative and quantitative. Food adulteration includes the gum arabic example and in many cases can be detected by NIR spectroscopy.

Refers to the truthfulness of the quality of foods, food raw materials and ingredients including the origin, variety, original production recipes, producers, applied methods, geographical location and time. Authenticity testing is not quantitative and could be detected by NIR spectroscopy to a limited extent.

You can hold this fingerprint (called a spectrum) against a validated fingerprint of the same sample material by using multivariate data analysis (chemometrics). The measurement will detect fluctuations in many different ingredients at once, which is why it is a “non-targeted” method of analysis.

Article “The use of rapid spectroscopic screening methods to detect adulteration of food raw materials and ingredients” published as an expert opinion in the scientific journal Current Opinion in Food Science (http://dx.doi.org/10.1016/j.cofs.2016.08.001)

The authors from the Department of Food Science at University of Copenhagen include: Postdoc Klavs Martin Sørensen, postdoc Bekzod Khakimov and Professor Søren Balling Engelsen.