Roberto Flore, head chef of Nordic Food Lab at University of Copenhagen won the Sardinian award “Manos in Pasta” for sending a message about true Sardinian gastronomic heritage to the rest of the world. 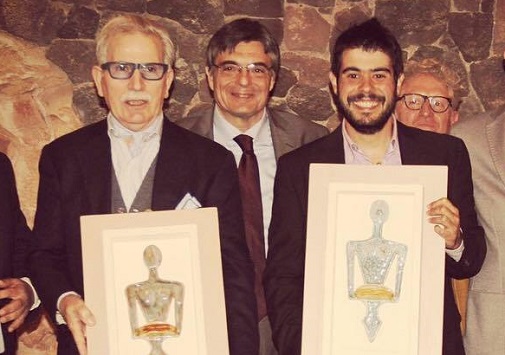 Head chef of Nordic Food Lab, Roberto Flore (with the award to the right), recently received the Sardinian food award “Manos in Pasta”. His mentor, the internationally recognized Sardinian chef Sergio Mei, was also presented with an award.

The Manos in Pasta award is dedicated to chefs who have demonstrated advanced skills and deep knowledge of Sardinian Culture, together with the capacity to spread the word about the gastronomic heritage of the Italian island to the world and use it to promote food innovation.

“As a head chef of the Nordic Food Lab, I have largely used ideas and techniques that come from my island in order to inspire the research in our laboratory,” says Roberto Flore, who is very proud to receive the prize together with his mentor, Sardinian chef Sergio Mei.

“I haven’t seen him for 10 years, so it was fantastic to meet him again. We are two people of different ages, but with similar values when it comes to food. I have been working with food in the kitchen since I was four years old, but, as a highly skilled chef, he was the one to show me which path to take. He is capable of giving advice without saying very much. Through his strong charisma he would demonstrate to me how to interact with food and food producers and to have respect for the ingredients,” says Roberto Flore.

The award was, for the second time, given by the organization Cunfraria de sos sabores de Mejlogu and handed over at the Aligi Sassu museum in Sardinia.

Nordic Food Lab is a center under the Department of Food Science at the University of Copenhagen.