The past shows how abrupt climate shifts affect Earth

New research shows how past abrupt climatic changes in the North Atlantic propagated globally. The study, led by researchers from The Niels Bohr Institute, at the University of Copenhagen, shows how interaction between heat transport in the ocean and the atmosphere caused the climatic changes to be expressed in different ways across the Southern Hemisphere. The results shows how forcing the climate system into a different state can trigger climate variations that spread globally and have very different impacts in different regions of Earth. This is important now, where rising atmospheric CO2 levels lead to global warming and may trigger abrupt climatic changes. The results have been published in the scientific journal Nature Geoscience

Sediments from New Zealand tarns were used in the study. Credit: Marcus Vandergoes

The history of climate on Earth is stored in tiny variations in kilometer-thick ice cores, sediments from lakes and oceans, and other natural archives that are layered down over thousands of years and works as archives of past temperatures. By recovering and deciphering these archives, researchers can reveal how and why the climate changed in the past, and in this way learn how the climate system may react in the future as the planet warms and the ice sheets melt.

As the Earth warmed out of the last ice age the climate of the northern hemisphere high-latitudes became extremely unstable. Ice cores from the Greenland Ice Sheet document temperature jumps of 10 degrees C in the space of a few decades. To understand how the climate can change so rapidly and whether similar events could be lurking in the future is a major focus of climate research. 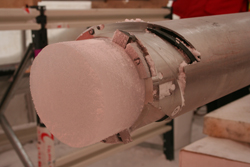 Palaeoclimate scientists have long held that changes in the amount of heat carried northward by Atlantic Ocean currents during the most recent ice age period were responsible for past abrupt climate changes. But most previous research into abrupt climate change has focused on climate records from the Northern Hemisphere.

”In this study, we take a different approach; examining in detail how the climate of the Southern Hemisphere behaved during a period of abrupt warming in Greenland and the North Atlantic. We find that changes in ocean heat transport are only half the picture and that fast adjustments in atmospheric heat transport are also crucial to explaining abrupt climate change”, says Joel Pedro, lead author and postdoc at Centre for Ice and Climate at the Niels Bohr Institute, University of Copenhagen in Denmark. 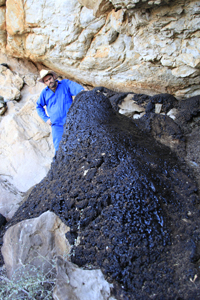 One of the rock hyrax middens, from south-west Africa, used in the study to reconstruct past changes in precipitation. Credit: Brian Chase.

The research was conducted by a team of scientists from Denmark, Australia, New Zealand, the United States, and France. The team compiled information from a wide array of climate records (84 in total), spanning Antarctic ice cores to northern Australian cave records and Patagonia glaciers to southern African rodent middens.

By comparing the climate records with climate model results, the researchers were able to confirm previous ideas that increasing northward heat transport in the Atlantic warms the North Atlantic and Greenland at the expense of abrupt cooling in the South Atlantic – a concept known as the ‘bipolar ocean seesaw’.

The importance of the atmosphere in climate change

Their crucial new result is to show that the atmospheric circulation adjusts in an effort to compensate for the change in ocean heat transport: as the ocean transports more heat northward the atmosphere responds by transporting more heat southward. However, the compensation is imperfect.

One of the Southern Ocean sediment cores used in the study. Credit: Helen Bostock.

Climate changes in different locations throughout the Southern Hemisphere reflect the battle between the heat transport in the ocean and atmosphere. At low latitudes, the atmosphere wins out, driving abrupt drying and warming. In the South Atlantic and Southern Ocean, New Zealand and Patagonia, the ocean wins out, driving cooling that is amplified around Antarctica by expanding sea ice.

“Our research underlines the intimate coupling between the ocean and atmosphere and helps to explain why past abrupt climate change unfolded so differently in different regions on Earth. The study further underlines a warning that climate scientists have been issuing for many years: forcing the climate system into a different state, as occurred during the warming out of the last ice age, can trigger climate instability with impacts that spread globally”, Joel Pedro adds.

Joel Pedro, postdoc at Centre for Ice and Climate at the Niels Bohr Institute, University of Copenhagen, Denmark. Phone +45 5333-8313, jpedro@nbi.ku.dk