Despite extensive historical knowledge about the African slave trade – including trends in the volume and demographics of the roughly 12 million people shipped from West and West Central Africa to the New World between 1500 and 1850 – fundamental details about their ethnic and geographical origins remain elusive.

Dr. Hannes Schroeder from the Centre for GeoGenetics at the Natural History Museum, University of Copenhagen, who led the study, explains: 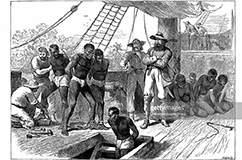 UNSPECIFIED - CIRCA 1880: Captives being brought on board a slave ship on the West Coast of Africa (Slave Coast). Wood engraving c1880 (Photo by Universal History Archive/Getty Images) Credit: UniversalImagesGroup / contributor

-  There are historical records - merchant ledgers, shipping records and the like - but they tend to refer to coastal shipping points rather than the slaves' actual ethnic or geographic origins and this is where the DNA comes in. It can provide new insights where historical information is missing. To our knowledge this is the first time that genome-wide data has been used to identify the origins of enslaved Africans. And given the limited knowledge we have on the slaves’ origins this is obviously quite a breakthrough.

Bones from the beach

Hannes Schroeder and colleagues performed a genome-wide analysis of three enslaved Africans buried in the Zoutsteeg area of Philipsburg on the Caribbean island of Saint Martin. Previous reports suggest that the “Zoutsteeg Three,” one adult female and two adult males, likely came from Africa as opposed to the New World.

The present study digs deeper into the Africans’ genetic origins, enriching the poorly preserved DNA using a technique known as whole genome capture. The authors compared the genomes with a reference panel of genotype data from 11 West African populations, and uncovered specific areas of origin.

- What’s new about our study is that we were able to obtain genome-wide data from really poorly-preserved skeletal remains using this new technique called whole genome capture. Those remains had essentially been lying on a Caribbean beach for hundreds of years so their preservation was really not good. But by enriching the poorly preserved DNA in those samples we were able to obtain enough data to be able to dig deeper into the genetic origins of those three individuals we analyzed.

The findings demonstrate that genomic data can be used to trace the genetic ancestry of long-dead and poorly preserved individuals, a finding with important implications for archeology, especially in cases where historical information is missing.

- There are still certain limitations - which are essentially to do with the comprehensiveness of our modern reference panels - but I don’t see why we shouldn’t be able to identify specific source populations or ethnic groups in the future.

The results are published in this week’s issue of PNA