Greenland is melting – the past might tell what the future holds

A team of scientists lead by Danish geologist Nicolaj Krog Larsen have managed to quantify how the Greenland Ice Sheet reacted to a warm period 8,000-5,000 years ago. Back then temperatures were 2-4 degrees C warmer than present. Their results have just been published in the scientific journal Geology, and are important as we are rapidly closing in on similar temperatures. 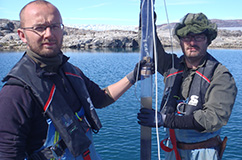 While the world is preparing for a rising global sea-level, a group of scientists led by Dr. Nicolaj Krog Larsen, Aarhus University in Denmark and Professor Kurt Kjær, Natural History Museum of Denmark ventured off to Greenland to investigate how fast the Greenland Ice Sheet reacted to past warming.

With hard work and high spirits the scientists spent six summers coring lakes in the ice free land surrounding the ice sheet. The lakes act as a valuable archive as they store glacial meltwater sediments in periods where the ice is advanced. That way is possible to study and precisely date periods in time when the ice was smaller than present.

- It has been hard work getting all these lake cores home, but is has definitely been worth the effort. Finally we are able to describe the ice sheet’s response to earlier warm periods, says Dr. Nicolaj Krog Larsen of Aarhus University, Denmark. 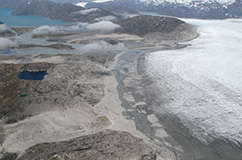 Frederikshåb Isblink in West Greenland. The small lake has previously received meltwater from the glacier when it was further advanced. Photo: Nicolaj Larsen.

The size of the Greenland Ice Sheet has varied since the Ice Age ended 11,500 years ago, and scientists have long sought to investigate the response to the warmest period 8,000-5,000 years ago where the temperatures were 2-4 °C warmer than present.

- The glaciers always leave evidence about their presence in the landscape. So far the problem has just been that the evidence is removed by new glacial advances. That is why it is unique that we are now able to quantify the mass loss during past warming by combining the lake sediment records with state-of-the-art modelling, says Professor Kurt Kjær, Natural History Museum of Denmark. 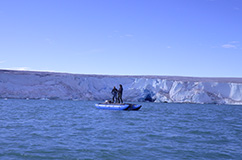 Their results show that the ice had its smallest extent exactly during the warming 8,000-5,000 years ago – with that knowledge in hand they were able to review all available ice sheet models and choose the ones that best reproduced the reality of the past warming.

The best models show that during this period the ice sheet was losing mass at a rate of 100 Gigaton pr. year for several thousand years, and delivered the equivalent of 16 cm of global sea-level rise when temperatures were 2-4 °C warmer. For comparison, the mass loss in the last 25 years has varied between 0-400 Gigaton pr. year, and it is expected that the Arctic will warm 2-7 °C by the year 2100.

Read the paper in GEOLOGY

The photos on this site must be used in conjunction with media coverage of the story. Click on the photos to download them in high resolution. Please credit the photographer.