New drug design enhances brain signalling by a factor of 1,000

Chemical-biological research from the University of Copenhagen sheds light on important communication processes in the brain by means of new effective molecules that improve the starting point provided by nature by more than 1,000 times. In the long term, this new knowledge may lead to psychopharmacological drugs with fewer side effects. The results have just been published in the recognised journals Nature Communications and Angewandte Chemie.

Proteins play a fundamental role in almost all biological processes. They consist of chains composed of up to 20 different amino acids, and their composition, structure and function are controlled by the genetic code. Brilliant minds at the Center for Biopharmaceuticals are now attempting to rewrite the core function of proteins by making alterations in their molecular composition, for example. By means of advanced chemical-biological techniques, researchers are capable of designing new chemical compounds that overcome nature's limitations. 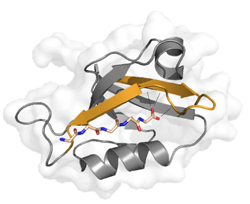 The capacity to manipulate proteins has led to important breakthroughs in biotechnology and biomedicine.

In the current study, the researchers studied receptors that play a key role in the brain in health and disease. Then they designed new chemical compounds – peptides – with superior effect on the receptors' interaction with gephyrin, a protein that is vital for the brain:

– The capacity to manipulate proteins has led to important breakthroughs in biotechnology and biomedicine. We have, among other things, studied the so-called GABA receptors which are important targets for drugs for the treatment of mental disorders, e.g. benzodiazepines for the treatment of anxiety and insomnia. We have, more specifically, studied the receptors' interaction with the protein gephyrin. Not only to learn more, at a structural level, about a key interaction in the brain, but also to see whether we could turn it up or down. We have very successfully achieved the latter – we can document an inhibition, which, at best, is more than 1,000 times stronger than what is seen in nature, says Postdoc Hans Maric. He is part of the Center for Biopharmaceuticals at the University of Copenhagen, which is headed by Professor Kristian Strømgaard.

The new research findings have just been published in Nature Communications and Angewandte Chemie. The first article describes the initial work with mapping glycine and GABA receptors, respectively, and how the two receptor types interact differently with gephyrin. The other article describes the molecular restructuring that has created a neuro-active peptide that is 1,000 times more powerful that what nature offers.

Drugs generally function by bonding with a specific receptor that is involved in a given disease process – thus halting the damaging effect. Unfortunately, this strategy often generates side effects as the process simultaneously shuts down a number of beneficial functions.

In recent years, interest has therefore arisen in a different strategy in which the drug does not affect the receptor directly, but alters the interactions that the receptor has with proteins inside the cell. In other words, instead of simply switching the function of the receptor on and off, the objective is now to control parts of the receptor’s effects.
This is, among other things, the kind of research that is conducted at the relatively new Center for Biopharmaceuticals.

Peptides and proteins are composed of amino acids which, in the body, are linked together in chains of varying length. The small chains with 2-50 amino acids are called peptides, and the large, often folded, chains are called proteins and often contain several hundred amino acids.