Green light for construction of the E-ELT

The ESO Council has now decided to start building the new large European telescope E-ELT (European Extremely Large Telescope) on 1 January 2015. This begins the first phase of construction of the world’s largest telescope – with Danish participation. The first phase of building a fully operational telescope complete with a set of innovative instruments will cost about one billion Euros. The telescope is expected to be operational in ten years. 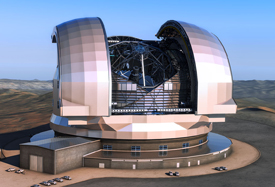 The E-ELT will be a telescope with a diameter of 39 meters. It will be able to capture both visible and infrared light. It will be built on Cerro Armazones in Chile’s Atacama Desert, 20 km from the other ESO telescope, the VLT on Cerro Paranal. The new telescope will be the world’s biggest ‘eye on the sky’.

The E-ELT is a telescope that can capture both visible and infrared light. It will have an aperture of 39 meters and will be built on the mountain Cerro Armazones in the Atacama Desert, 20 kilometers from the other large ESO telescope, the VLT on Cerro Paranal. It will be the world’s biggest ‘eye on the sky’.

“This is a huge step forward for European astronomy and a historic moment, where Europe, for the first time since the start of the 1900s, will once again take the lead and responsibility for the global development of astronomical research,” says astronomer Uffe Gråe Jørgensen, head of the research group Astrophysics and Planetary Science at the Niels Bohr Institute at the University of Copenhagen and the Danish member of the ESO council.

The new telescope will help researchers make new scientific discoveries within the areas of exoplanets (an exoplanet is a planet orbiting a star other than the Sun) and the composition of stars in both near and distant parts of the universe.

“This is fantastic news for Danish and European astronomy. The E-ELT is a flagship for the exploration of space and the areas of astrophysics that the E-ELT will give a huge boost to are absolutely central to Danish astrophysics. In particular, the two aforementioned areas of study, exoplanets and the most distant, first galaxies in the universe are very active research fields in Denmark. This is also very good news for the Danish universities who have chosen to invest considerable amounts of money into Danish participation in the project. Now the project is on track and we can finally begin to realise the dream,” says a very happy Johan Fynbo, Professor at the Dark Cosmology Centre at the Niels Bohr Institute at the University of Copenhagen. 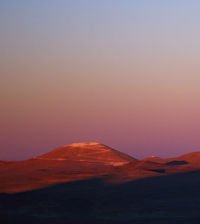 A picture of the E-ELT’s new home taken from the nearby Paranal observatory in November 2014. The top of the mountain Cerro Armazones is being levelled and you see the wide new road that is being built up to the mountaintop. Credit: ESO/G. Lambert

Professor of observational asteroseismology and exoplanet research Hans Kjeldsen from the Stellar Astrophysics Centre at Aarhus University is just as excited: “We are really getting good value for our money with the E-ELT. We are especially interested in the opportunities to analyse the atmospheric composition of the Earth-like exoplanets. In addition, if it turns out that there are bio-indicators, such as oxygen, it would be a clear indication that there is life as we know it on the exoplanet.”

In Chile, some of the preparatory work has already been done on top of Armazones and the next few years will be very exciting. The contracts for the dome and the main structure are the biggest ESO contracts ever and they will be awarded over the next year.

In June 2012, the ESO Council approved the construction on the condition that contracts of more than 2 million Euros could only be agreed upon when 90 percent of the telescope’s full expenditure budget (1.083 million Euros) was guaranteed. An exception was made regarding the work on the foundation on the mountain, so the work started with the groundbreaking in June 2014 and is progressing on schedule.

Ten percent of the project costs are currently transferred to phase two. Now that Poland has joined ESO, the participating countries have guaranteed more than the required 90 percent for the phase one’s implementation. The new member, Brazil, is expected to be able to guarantee its national contribution with a few years.

The ESO Council has decided that phase one of construction of the 39 m telescope can continue. This was in order to not delay the project. The financing obtained includes contracts for the telescope’s dome and main structure. They will be concluded in late 2015. They will be the biggest ESO contracts ever and they will ensure that a fully operational telescope will be built.

The parts of the project which have not yet been funded include parts of the adaptive optics, some of the instrumentation, the innermost five rings of the mirror segments in the telescope’s primary mirror (which is comprised of a total of 210 mirror segments) along with a number of reserve mirror segments, which are necessary to ensure a more effective operation of the telescope in the future. When more funds are provided for the project, they will set to work on these parts. Without the, the telescope could still function and contribute new scientific breakthroughs and it is expected that the contributions from the new ESO member, Brazil, will be a great help for the final completion of the E-ELT.

“The funds that have now been secured allow us to build a fully operational E-ELT, which will be the most powerful of all of the very large telescopes currently being planned. We will be able to collect more light and we will have the best possible instruments. With the new telescope we will be able to assess the conditions on Earth-like exoplanets, we will able to see individual stars in nearby galaxies better and we will be able to study the more distant parts of the universe in even greater detail,” concludes ESO Director-General, Tim de Zeeuw.

At a meeting of ESO’s highest authority, the Council, on 3 December 2014, the green light was given for the construction of the European Extremely Large Telescope (E-ELT) in two phases. Phase one is will cost about one billion Euros and will ensure the construction of a fully operational telescope including a number of powerful new instruments. (Credit: ESO)