Even though the University of Copenhagen must still reduce enrolment by 883 student places, a new agreement with the Ministry of Higher Education and Science has given the University an extra four years to do so. 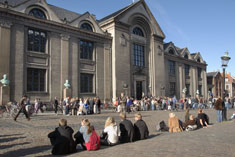 The Minister for Higher Education and Science and the Danish Rector's Conference yesterday reached an agreement on the terms of a new model for reducing enrolment in university programmes. As part of the agreement, the Higher Education Ministry has accepted the universities' request that the announced admissions drawdown begin at the Bachelor level. In addition, yesterday's agreement will also break the reduction´s strong connection with specific academic fields.

The guidelines for the “dimensioning model” now resemble more closely those the University of Copenhagen had outlined in its five-point plan for improving the quality of instruction, which was passed in March. It will still be the Ministry that determines the size of the reductions, as well as how they are to be spread among the individual faculty groups, but it will be up to the universities themselves to decide which specific programmes will be affected.

“We are no longer faced with automatically dictated reductions that focus solely on the current employment situation. We now have the ability to work with the organisations that hire our graduates and evaluate which fields will need more, and which will need fewer, employees. The task for us now will be to go through the demanding process of drawing enrolment down,” University of Copenhagen Rector Ralf Hemmingsen says.

The University must reduce undergraduate enrolment by 883 over the next four years, based on 2013 enrolment. Based on 2014 acceptance figures, the number is closer to 1,000. This is unchanged from the Ministry’s original plan. Likewise, it is still the Faculty of Humanities that will bear the brunt of the drawdown, but unlike under the previous plan, the Faculty will continue to be able offer a number of language programmes.

“We’ll still need to draw enrolment down significantly, but now we can go about it in a way that allows us to keep as many programmes as possible open. Some will still wind up in a situation in which they have very few students enrolled. That’s a bad situation to be in academically and financially, and in these situations we’ll need to come up with an alternative way of organising the programmes that will allow us to continue to ensure graduates the best possible employment outlook,” says Ulf Hedtoft, the Dean of the Faculty of Humanities.

The management of the Faculty of Science said they too were satisfied with the new agreement.

“It is important that we can implement the reduction gradually, and that we prevent enrolment from falling to critically low levels in fields that are engines for growth and employment. It is extremely important for us to be able to retain our capacity to attract foreign students as well as Danish students without a legal claim to study a Master's programme,” says Henrik Busch, the Associate Dean for Education for the Faculty of Science.

The next step in the reduction process will see individual university rectors meeting with the Minister for Higher Education and Science to discuss specific proposals to reduce enrolment.

“Now that we’ve established the guidelines, I am looking forward to starting the negotiations. We have been given more freedom to achieve the enrolment goals the Government has set. Moreover, I am satisfied that the process will be evaluated in three years.”

Read about the agreement in the Ministry of Higher Education and Science's press release. (In Danish)