Scientists break the genetic code for diabetes in Greenland

New Danish genetics research explains the high incidence of type 2 diabetes in the Greenlandic population. The ground-breaking findings have just been published in the prestigious scientific journal Nature.

New Danish genetics research explains the high incidence of type 2 diabetes in the Greenlandic population. The ground-breaking findings have just been published in the prestigious scientific journal Nature.

A spectacular piece of detective work has mapped a special gene variant among Greenlanders which plays a particularly important role in the development of type 2 diabetes. The results have been published in Nature and can be used to improve prevention and treatment options for those genetically at-risk.

In collaboration with Greenland researchers from Steno Diabetes Center and University of Southern Denmark, researchers from the University of Copenhagen have carried out the ground-breaking genetic analysis based on blood samples from 5,000 people or approx. 10% of the modestly-sized population inhabiting an area larger than western Europe.

– We have found a gene variant in the population of Greenland which markedly increases the risk of developing type 2 diabetes. The gene variant is only found in Greenlanders and explains 15% of cases of diabetes in the country, explains Professor Torben Hansen from the Novo Nordisk Foundation Center for Basic Metabolic Research at the University of Copenhagen who conducts research into the link between our genetic make-up and the development of diabetes and obesity as well as the effect of treatment. Together with Associate Professor Anders Albrechtsen from the Bioinformatics Centreat the University of Copenhagen, he is the driving force behind the findings.

The study was a challenge in several ways. Collecting samples from 10% of the population of such a big country was a huge logistical task, and it was only possible because so many Greenlanders volunteered to participate. Additionally, the study was a statistical challenge as many of the participants are of both Inuit and European ancestry – and because many of the participants are related:

– For some of the analyses, we therefore had to develop new methods, and for others, we used methods which were only developed recently, explains postdoc Ida Moltke from the Department of Human Genetics at the University of Chicago. She is one of the two first authors of the article and responsible for the statistical analyses. 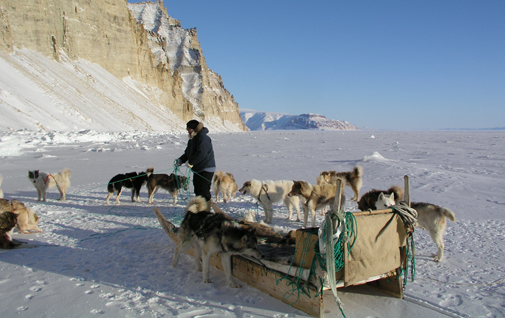 Several epidemiological studies have looked at the health implications of the transition from life as sealers and hunters in small isolated communities to a modern lifestyle with appreciable dietary changes.

By means of advanced gene chip technology – which over the past ten years has led to a marked increase in the speed of genetic analyses – the Danish team analysed the 5,000 blood samples for 250,000 gene variants which play a role in metabolic diseases such as diabetes, obesity and cardiovascular disease.

– Our attention was quite soon caught by a particular variant of the TBC1D4 gene which controls glucose uptake in muscle cells. Roughly speaking, this means that in carriers of this particular gene variant, the uptake of glucose by the muscles is hampered, for example after a meal which results in raised blood glucose levels. However, this particular gene variant is primarily found in Greenlanders, and about 23% of the Greenlandic population are carriers of the variant which prevents the optimum functioning of the glucose transporters in the cells. The gene variant is not found in Europeans at all, explains Assistant Professor Niels Grarup from the Novo Nordisk Foundation Center for Basic Metabolic Research at the University of Copenhagen, the other first author of the article.

Sixty per cent of the test individuals aged 40+ who have inherited the gene variant from both their mother and their father have type 2 diabetes. For the 60+ group, the figure is 80%:

From seal meat to too many sweets

From a scientific point of view, looking at relatively isolated communities makes a lot of sense when you are conducting research into pathological genes. Particular biological mechanisms are much more easily identified in isolated populations, such as the people of Greenland.

– Several epidemiological studies have looked at the health implications of the transition from life as sealers and hunters in small isolated communities to a modern lifestyle with appreciable dietary changes. Perhaps the gene variant which has been identified can be interpreted as a sign of natural selection as the traditional Greenlandic diet consisted primarily of protein and fat from sea animals, i.e. an extremely low-carb diet. However, so far these are but speculations, says Associate Professor Anders Albrechtsen.

The data will be studied further in the coming years. For example, Professor Marit Jørgensen from the Steno Diabetes Center and Professor Peter Bjerregaard from the National Institute of Public Health will continue the epidemiological studies, among other things to establish the risk of cardiovascular disease among carriers of the special gene variant.