A grant of 6 million euros for the HumEn project brings together leading European stem cell-research groups and industrial partners in a coordinated and collaborative effort aimed at developing glucose-responsive, insulin-producing beta cells for future cell-replacement therapy in diabetes. The project will contribute significantly to better treatment and quality of life for the increasing population of diabetics.

The HumEn project, supported through the European Commission’s HEALTH research programme and headed by Professor Henrik Semb from the Danish Stem Cell Center (DanStem) at the University of Copenhagen, strengthens the future perspectives for cell based treatment of diabetes. The project is important for keeping Europe on the forefront of stem cell research, creating new commercial possibilities and increased competitiveness for the European biomedical industry. The grant is for four years. 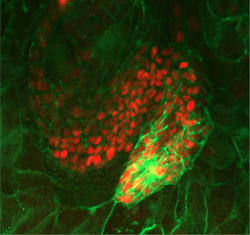 Despite progress in creating insulin-producing beta cells from human pluripotent stem cells, full maturation into transplantable beta cells that can cure diabetes has so far not been achieved in the laboratory.

“But with this grant, we are able to bring together some of the best stem cell research groups in Europe. I believe that HumEn’s unique constellation of research competences, the interdisciplinarity, and the very coordinated and collaborative approach that our project is based on, will enable us to reach the goal of developing functional, glucose-responsive, insulin-producing beta cells, and thus bring the new therapy closer to the patients.”

The European Commission’s HEALTH research programme recently granted seven stem cell research projects. Common for these projects is the focus on understanding the underlying mechanism of the self-renewing capacity of stem cells and their differentiation into mature functional cell types suitable for various cell-based therapeutic applications.

HumEn has already established closer, collaborative relations to three of the other projects. The four consortia will collaborate and coordinate training and outreach activities, sharing relevant basic knowledge and benefit from interdisciplinary and intersectorial synergies across the projects. The three other projects are: PluriMes, a project focused on directing pluripotent stem cells to become bone and muscle forming cells; Neurostemcellrepair, a project aimed at taking human stem cells through the final steps toward clinical application in cell replacement therapy for neurological disorders such as Parkinson's Disease; and ThymiStem, a program to develop stem cell approaches to boosting the immune system by repairing the thymus, a key organ for producing important immune cells.

Read more about the other projects at EuroStemCell

Pluripotent stem cells have the potential to generate any type of cell found in the body. They are generated in the laboratory by capturing or recreating cell types that exist only transiently during embryonic development.

Beta cells are the key player in diabetes: the cells are found in the pancreas, and are responsible for producing insulin, the hormone that controls energy transport in the form of glucose from the bloodstream to the muscles. In Type-1 diabetes, the immune system kills the beta cells, while in Type-2 diabetes, insulin sensitivity decreases making the body require more and more insulin, which the beta cells are unable to provide, eventually leading to beta cell failure.

Stem cells for treatment of diabetes. Insulin deficiency, absolute or relative, underlies all forms of diabetes and currently affects 366 million people worldwide. In Europe alone, the number of people with diabetes is estimated to be 52.8 million. Currently, the only way to replace lost or dysfunctional beta cells is via transplantation of a whole pancreas or islets of Langerhans. Unfortunately, today only a selected few are offered this treatment due to lack of donors. The aim of HumEn is to develop functional, insulin-producing beta cells from pluripotent stem cells in the laboratory.