New research shows that low doses of a cancer drug protect against the development of type 1 diabetes in mice. At the same time, the medicine protects the insulin-producing cells from being destroyed. The study is headed by researchers from the Faculty of Health and Medical Sciences at the University of Copenhagen, and has just been published in the distinguished scientific journal Proceedings of the National Academy of Sciences of the United States of America (PNAS).

Very low doses of a drug used to treat certain types of cancer protect the insulin-producing cells in the pancreas and prevent the development of diabetes mellitus type 1 in mice. The medicine works by lowering the level of so-called sterile inflammation. The findings have been made by researchers from the University of Copenhagen, the Technical University of Denmark and the University of Southern Denmark working with researchers in Belgium, Italy, Canada, Netherlands and the USA. 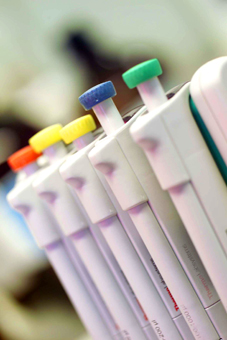 “Our results are a step towards developing a preventive treatment for type 1 diabetes,” says Dan Ploug Christensen.

"Diabetes is a growing problem worldwide. Our research shows that very low doses of anticancer drugs used to  treat lymphoma – so-called lysine deacetylase inhibitors – can reset the immune response to not attack the insulin-producing cells. We find fewer immune cells in the pancreas, and more insulin is produced when we give the medicine in the drinking water to mice that would otherwise develop type 1 diabetes," says postdoc Dan Ploug Christensen, who is the first author on the article and responsible for the part of the experimental work carried out in Professor Thomas Mandrup-Poulsen’s laboratory at the Department of Biomedical Sciences, University of Copenhagen.

The ground-breaking findings have just been published in the scientific journal Proceedings of the National Academy of Sciences of the United States of America (PNAS).

From mice to men

“This type of medicine is already being used against certain cancers, but we used doses which are 100 times lower than those used in cancer treatment and which have been shown to be safe in children with certain rheumatic diseases,” says Thomas Mandrup-Poulsen.

“Our results are a step towards developing a preventive treatment for type 1 diabetes,” says Dan Ploug Christensen. “It works by blocking the molecules that send the harmful inflammation signals into the insulin-producing cells. In doing so, it prevents the cells from producing a number of factors which contribute to destroying the cells when exposed to inflammation.”

The researchers have subjected insulin-producing tissue from organ donors to the inflammation signals and shown that cancer medicine also delays the destruction of human cells. “The next step is clinical trials to test whether the drug also has an effect on people at risk of developing type 1 diabetes, for example close family members to patients with the disease,” says Thomas Mandrup-Poulsen.

No cure is available for type 1 diabetes, which has to be treated with several insulin injections a day. In Denmark, the incidence of type 1 diabetes is increasing by approx. 3 per cent a year.

Diabetes mellitus type 1 is an autoimmune disease. This means that it is the body’s immune system that destroys the cells in the pancreas which produce the vital hormone insulin.