Why do humans pig out?

Researchers from University of Copenhagen have discovered big differences in the variability of eating habits among pigs. The newly published study - led by professor Haja Kadarmideen - is the first in the world looking at pig to human comparative genetic mapping to reveal key genes on the human genome that are known to be involved in obesity.

With 30 million pigs produced in Denmark each year genomics scientist at University of Copenhagen Haja Kadarmideen decided to turn this to his advantage with his latest research on people’s eating habits surrounding obesity and diabetes. Realizing it would be impossible to monitor the eating behaviour of 1,200 humans every single hour of every day, he turned to Danish pigs to find out why do humans pig out?

Indian-born Australian Haja Kadarmideen, who is a professor and research group leader from the Faculty of Health and Medical Sciences at University of Copenhagen, wanted to understand why for some people opening the fridge or pantry cupboard could mean a pig out. 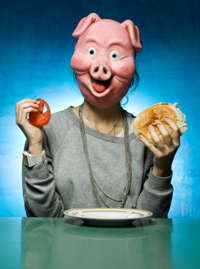 Why do some humans have a compulsive or comforting behaviour to overeat?

“Why do some humans have a compulsive or comforting behaviour to overeat, while others have control over their eating habits? Is it behavioural, for example when we are stressed or happy or sad, or are we genetically programmed to seek more food than we need?” says Kadarmideen.

First kind of study in the world

As pigs are a well-known animal model for studying human obesity because of similar genomes and digestive systems, over a period of four years, nearly 1,200 pigs were given unlimited access to food. With the help of the Pig Research Centre from the Danish Agriculture and Food Council, each day the pigs were monitored for how often they would eat, how much time they spent visiting the feeder, how much they had eaten and what kind of food they were eating, while constantly mapping their overall weight gain.

Each of the 1,200 pig’s DNA was assessed using a genomic chip technology that simultaneously created a genetic profile at 60,000 locations across the entire DNA of each pig. “We linked this whole genomic profile and eating behaviour observations on all pigs via genome wide association studies to detect eating behaviour genes – a big task equivalent to finding polar bears in a snowstorm”, says Kadarmideen.

Kadarmideen and his team, which included a very talented Vietnamese PhD student Duy Ngoc Do who analysed the data, were surprised by the results. They discovered big differences in the variability of the pigs eating habits. The research was clearly able to show that for some (pigs with certain genetic variants) overeating was normal behaviour.  That for a particular group of pigs there was clear evidence they were genetically programmed to eat more food than others. 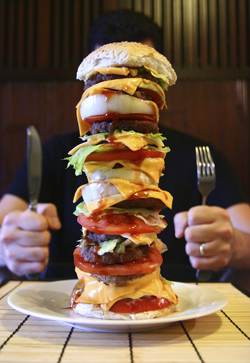 “This is the first study in the world looking at pig to human comparative genetic mapping to reveal key genes on the human genome (e.g. on chromosomes 6 and 17) that are known to be involved in human obesity and some new genes; together they may explain why we crave for (more and sometimes unhealthy) food and why some of us overeat, so consequently developing obesity and diabetes, both of which are key societal and public health problems,” adds Kadarmideen.

The potential implications for better understanding of human health could mean in the future a simple blood (DNA) test could determine whether humans are susceptible to unhealthy eating behaviour and potentially develop diseases like obesity and diabetes. Thus addressing the question some humans may have a genetic disposition to overeat.

“Our pig model research indicates that eating behaviours runs in families. If a mother or father or both had unhealthy eating habits they are likely to pass on some part of their habits to their children through their DNA. However, not all children in the same family are similar in eating behaviour and this is because they may have received different variants of eating behaviour genes, which could lead to obesity. There is also an environmental and psychological influence to consider, the ‘epigenetic’ factor and ‘fetal programming’ in the mother’s womb that can permanently affect the eating behaviour of children. Overall it is a complex issue that needs further investigation,” Kadarmideen says.

Kadarmideen says that potentially we could come to understand and treat this ‘unhealthy eating behaviour’ as a disability issue.

“I believe more follow-up studies would strengthen our findings that some people cannot stop “pigging out” as it is written in their DNA. Once we are aware that this might be the issue, we can then be more understanding and helpful and encourage lifestyle and behavioural changes to offset the actions of these potential obesity genes,” concludes Kadarmideen.

Read the scientific article in PLoS One