From 2009 to 2012 the Botanical Garden in Copenhagen has been transformed, and now it appears more beautiful and attractive than ever before. Thanks to a donation of DKK 17 million from A.P. Møller and Chastine Mc-Kinney Møller’s Foundation for General Purposes, The Natural History Museum has been able to renovate and renew the old garden. The newly renovated garden is officially inaugurated today at two p.m. The inauguration will take place near the Palm House in the Botanical Garden. 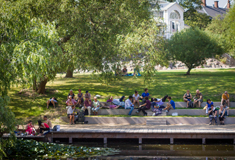 Photo: People are having a good time at the new wooden wharf on the lake shore.
Photographer: Birgitte Rubæk.
Click on the images to see them in full size.

In connection with the renovation the Botanical Garden has been made more user-friendly and has been expanded by 10,000 square metres as the Observatory Hill, which is the highest point of the inner city, has been included in the garden. All the paths have been renovated, and several recreational areas have been added to the Botanical Garden as well as new irrigation systems, greenhouses for teaching and a small wooden wharf by the lake.

"The Botanical Garden is a green oasis of peace and contemplation where you can enjoy the special atmosphere and expand your knowledge of the plant kingdom. With the renovation of the garden, plants have the best conditions to live and grow, and guests have a more welcoming garden offering a break in beautiful surroundings in the middle of the bustling city," says Morten Meldgaard, director of the Natural History Museum.

A garden for many purposes

The Botanical Garden, which is also a part of the University of Copenhagen, functions as a garden for public outreach, teaching and research, and with its approx. 9,000 different plant species it represents the largest living plant collection in Denmark. The unique collection has made the garden famous outside Denmark, and due to the renovation of the old garden, there now exists optimal conditions for preserving the collections and the special atmosphere for which the Botanical Garden is also known. 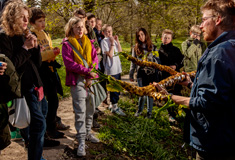 Photo: Every week the School Services at
The Natural History Museum teaches students
nature history and science. Here the seed to
a lifelong fascination of nature is planted.
Photographer: Mikal Schlosser.

"The generous donation from A.P. Møller and Chastine Mc-Kinney Møller’s Foundation for General Purposes has made an extensive renovation and refurbishment of the Botanical Garden possible. The beautiful new garden is a unique oasis in the big city which can arouse interest in plant life, nature and science. It is about expanding the concept of education throughout the educational system to also include the natural sciences," says Ralf Hemmingsen, Rector of the University of Copenhagen.

Facts about the newly renovated garden