30 minutes of daily exercise does the trick

Same effect in half the time

Researchers at the University of Copenhagen have shown that 30 minutes of daily training provide an equally effective loss of weight and body mass as 60 minutes. Their results have just been published in the American Journal of Physiology.

Forty percent of Danish men are moderately overweight. For thirteen weeks, a research team at the Faculty of Health and Medical Sciences followed 60 heavy – but healthy – Danish men in their efforts to get into better shape. Half of the men were set to exercise for an hour a day, wearing a heart-rate monitor and calorie counter, while the second group only had to sweat for 30 minutes. Research results show that 30 minutes of exercise hard enough to produce a sweat is enough to turn the tide on an unhealthy body mass index: 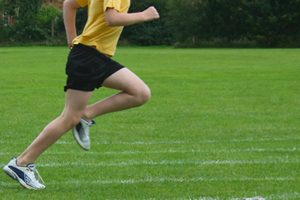 "On average, the men who exercised 30 minutes a day lost 3.6 kilo in three months, while those who exercised for a whole hour only lost 2.7 kg. The reduction in body mass was about 4 kg for both groups," reports Mads Rosenkilde, PhD student, Department of Biomedical Sciences.

"Participants exercising 30 minutes per day burned more calories than they should relative to the training program we set for them. In fact we can see that exercising for a whole hour instead of a half does not provide any additional loss in either body weight or fat. The men who exercised the most lost too little relative to the energy they burned by running, biking or rowing. 30 minutes of concentrated exercise give equally good results on the scale," explains Mads Rosenkilde.

Mads Rosenkilde postulates that some of the explanation for the surprising results is that 30 minutes of exercise is so doable that participants in the study had the desire and energy for even more physical activity after their daily exercise session. In addition, the study group that spent 60 minutes on the treadmill  probably ate more, and therefore lost slightly less weight than anticipated.

"The participants in our study trained every day for three months. All training sessions were planned to produce a light sweat, but participants were expected to increase the intensity and give it gas three times a week," explains Mads Rosenkilde. He is also surprised at the research results, and the goal now is to study the effects of other types of exercise:

"Another interesting scenario is to study exercise as a form of transport. Training is fantastic for your physical and mental health. The problem is that it takes time. If we can get people to exercise along the way  – to work, for example – we will have won half the battle," says Mads Rosenkilde.

On the right wavelength

The research results are unique, because participants in the study belong to the large but often overlooked group of moderately overweight men, who have gradually become forty percent of the male population in Denmark.

Participants in the study wanted a lifestyle change with the help of exercise training, and in the period of the study, they were followed closely by health science researchers with focus on energy balance, insulin resistance and hormones in the blood. Ethnologists also took part in order to uncover the cultural barriers involved in training and changing well entrenched habits.

The broad interdisciplinary approach of the FINE project – a Danish acronym for Physical Activity for a Long Healthy Life – has generated extremely strong data. Very few research subjects dropped out, because of the focus on participants’ motivation to exercise, both early on – and during – the process:

"We have really been on the same wavelength as our research subjects – and the FINE study covered all aspects of training, both physical and psychological," concludes Mads Rosenkilde.

Read the article in The American Journal of Physiology

The FINE project was an interdisciplinary collaboration among researchers from three faculties at the University of Copenhagen and two hospitals in Greater Copenhagen. In time, the knowledge gained by the project can prove significant for diagnostics and therapy in connection with preventing and treating lifestyle  diseases and can lead to the development of better drugs.

The project received financial support from the UNIK initiative Food, Fitness & Pharma, the Novo Nordisk Foundation and the Center for Healthy Aging at the Faculty of Health and Medical Sciences at the University of Copenhagen.