Danish teenagers are not looking for answers to life's big questions in established religious institutions. Instead, they engage in intense idolisation of American films and TV shows about vampires, angels and other supernatural beings. A new PhD thesis from the University of Copenhagen shows that a series like Twilight for some young Danes replace traditional religion and enhance their interest in spiritual and religious issues.

Many Danish teenagers reject old-fashioned established religious institutions such as the Danish National Evangelical Lutheran Church and its traditional religious beliefs. The lack of a coherent religious world view will in some cases make TV shows like Twilight and the Vampire Diaries, in which vampires and other religious symbols abound, assume part of the function which the old religious institutions used to have. 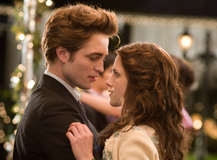 The vampire Edward and Bella from Twilight.
Photo: Nordisk Film

“My thesis demonstrates that a film series like Twilight offers young people a playground for exploring life’s big questions, moral judgment and to imagine the possibility of the supernatural in a pleasurable and informal fashion. The fictional worlds challenge their presuppositions about themselves and their surroundings,” explains PhD Line Nybro Petersen from the Department of Media, Cognition and Communication, University of Copenhagen. She adds:

“A number of the teenagers I interviewed did, for example, express their fascination with the fact that vampires that are traditionally portrayed as evil often come across as heroic characters in current TV shows.  They see that as an invitation to reconsider their own assumptions about good and evil. But apart from this it is of course important to stress that the TV shows attract the teenagers' attention because they to a great extent deal with the very problems the teenagers grapple with themselves."

" A number of the teenagers I interviewed did express their fascination with the fact that vampires that are traditionally portrayed as evil often come across as heroic characters in current TV shows.

Line Nybro Petersen's PhD thesis "Wicked Angels, Adorable Vampires!" consists of a qualitative study of the consumption of TV shows with supernatural and religious content among 72 14- to 18-year-old Danish teenagers, a smaller study among a group of nine teenage Twilight fans as well as a more general analysis of American TV shows' representations of religious themes and issues.

According to Line Nybro Petersen, some young fans' idolisation of a film series like Twilight can become so intense that it resembles a new form of religious worship. The film or TV show itself becomes sacred and the fans compare all other supernatural shows to the “canonical” and original show.

“I have observed the Twilight fans at premieres and noted how they through a number of rituals show or perform their affiliation with the series. They cry, shriek, and sing – and this performance is central to their sense of belonging to something larger than themselves. They do, in other words, invest a lot of emotion in the fictional universe and the events that form part of it,” Line Nybro Petersen points out.

The mediatisation of religion

Line Nybro Petersen emphasises that her qualitative study among a fairly small group of Danish fans cannot be considered representative of all young Danes’ interest in religion and American TV shows with religious content. But the results of her study do confirm the results of a quantitative studies in for example the mediatisation of religion.

“Other studies have pointed to the fact that TV shows and films with a supernatural content tend to increase people’s interest in religious themes and my thesis underpins that these shows also have the ability to reshape young people’s religions imaginations because, among other things, the religious elements which the shows draw on must be subjected to a certain narrative logic in order to fit into the fictional universes. In this fashion, the religious elements are recontextualised and seem very different from the traditional representations we all know from the Bible and other religious institutions,“ Line Nybro Petersen concludes.