In a new study, scientists at the University of Copenhagen show that a specific type of carbohydrate plays an important role in the intercellular signalling that controls the growth and development of the nervous system. In particular, defects in that carbohydrate may result in the uninhibited cell growth that characterizes the genetic disease neurofibromatosis and certain types of cancer. The results have just been published in the well-reputed journal PNAS.

Scientists from The Faculty of Health and Medical Sciences at the University of Copenhagen have put a special type of fruit fly under the microscope. The new research results turn the spotlight on a certain group of carbohydrates – the so-called glycolipids – and their influence on the cells’ complicated communication system. In the long term, this model study can shine new light on the disease neurofibromatosis for the benefit of patients the world over. 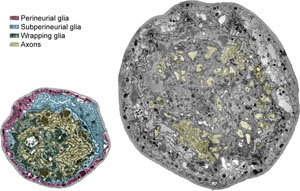 "The most important thing about our discovery right now is that we document a new function for carbohydrates in the communication between cells. We also show how disturbances in the signalling pathways cause changes in cellular growth. This is knowledge that cancer researchers can develop," says Ole Kjærulff, doctor and associate professor at the Department of Neuroscience and Pharmacology, who has conducted the study together with Dr. Katja Dahlgaard, and Hans Wandall, associate professor at the Copenhagen Center for Glycomics.

Glycolipids are compounds consisting of fats linked to long chains of sugar molecules. They are located in the cell membrane, where they serve various functions, such as protecting the cell or making it recognizable to the immune system.

"In the fruit fly model, if we prevent the sugar chains from lengthening, we can show that carbohydrate plays an important role in controlling the growth of normal cells. When the sugar chains are shortened, the tissue grows dramatically on account of increased cell division. In particular, it appears that the nervous system’s support cells – the glia cells – are influenced," explains Hans Wandall, associate professor.

Neurofibromatosis can cause deformity

The new results also influence our understanding of neurofibromatosis. This is a heritable disorder that results in unsightly tumours – so-called neurofibromas – in the nerves and skin. The disease affects approximately 20 people out of 100,000 and varies from mild to severe cases with decided deformities. The condition also affects the bones and often causes learning problems:

"When you get closer to an understanding of the mechanisms that result in a certain disease, naturally it is easier to influence the disease process in the form of drug development in the longer term. Neurofibromatosis is not a terminal disease, but it very much affects the life quality of the people who have it because the symptoms are so noticeable," explains Ole Kjærulff. Hans Wandall adds that the disease is also associated with certain types of cancer, particularly in the brain.

The new finding was made in fruit-fly mutants that lack a gene called egghead. Together with other scientists, associated professor Hans Wandall from the Copenhagen Center for Glycomics previously discovered that the egghead gene codes for an enzyme that is necessary for lengthening the sugar chains. Corresponding enzymes are found in humans.

The recently published results in PNAS were obtained in collaboration between scientists from the Copenhagen Center for Glycomics, the Department of Neuroscience and Pharmacology as well as the Department of Biomedicine, the Faculty of Health and Medical Sciences, University of Copenhagen.

The Copenhagen Center for Glycomics is a basic research center at the University of Copenhagen that wants to crack the biochemical code of carbohydrates. Read more here