Researchers at the University of Copenhagen have designed, produced and patented a new chemical compound for the possible treatment of brain damage caused by stroke. The compound binds 1,000 times more effectively to the target protein in the brain than the potential drug currently being tested on stroke victims. The results of biological tests have just been published in the renowned journal PNAS.

More than 140,000 people die each year from stroke in the United States. Stroke causes the brain to release large amounts of glutamate, an activating signal compound, all at once.  This overactivates the receptors in the surrounding healthy tissue, causing the level of calcium in the cells to rise dramatically.  This then kick-starts a toxic chain reaction causing cell death. Scientists believe that this process is the cause of the brain damage that occurs in the wake of a stroke. Therefore they are looking for compounds that can limit cell death: 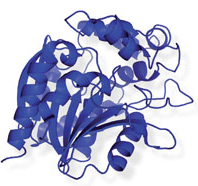 "Research on animal models shows that the new compound we have designed and produced reduces the dead area in the brain after a stroke by 40 per cent. In addition, we can show that our compound is far more biologically effective than the potential drug currently being tested in clinical trials," explains Anders Bach, medicinal chemist and postdoc at the Faculty of Health and Medical Sciences.

A research project based at the Faculty of Health and Medical Sciences is the catalyst for the development of drugs to treat brain damage resulting from stroke. A new chemical compound has shown to be extremely potent, binding 1,000 times better than the potential drug currently under clinical development. Biological tests also indicate that the new compound shows high biological activity in animal models and is able to pass through the nearly impermeable blood-brain barrier, which is otherwise a fundamental challenge in clinical drug development. The results have just been published in the scientific journal PNAS – Proceedings of the National Academy of Sciences of the United States of America.

"Our compound is able to pass through the blood-brain barrier, but also interesting is that it improves motor function in the animals that have been subject to stroke, for example, seen as increased grip strength in the paws of the mice," relates Anders Bach.

Previously the development of drugs to combat brain damage resulting from stroke focused on blocking the receptors for signal compounds in the brain, such as glutamate.  While this protected the receptor against the danger of overactivation, it unfortunately also influenced the normal vital functions of the receptor, causing unacceptable side effects.

Therefore in recent years there has been increased interest in an alternative strategy where the drug does not influence the receptor directly, but instead acts on the interactions between the receptor and the proteins in the cell.  This is an important area of focus for the Chemical Biology research team at the University of Copenhagen:

"Our research is concentrated on disrupting the interaction between the so-called NMDA receptor and the intracellular protein PSD-95. Other scientists have shown interest in the same area – one group has developed a particularly interesting compound that is currently undergoing clinical development. However, we have reconsidered the design of the compounds in this area and come up with a new one that is more effective," states Anders Bach.

Detailed understanding of the molecular mechanism

In order to find compounds that can detach the PSD-95 protein from the NMDA receptor, one must have a method for measuring the extent to which the compounds bind to PSD-95.

"We have established a method – fluorescence polarisation – that has been very successful in helping us develop a number of potent compounds over a long period of time," recounts Anders Bach. He adds that scientists have committed many resources to finding out exactly how the compounds bind to PSD-95 – using for example sophisticated biophysical methods. This has resulted in detailed understanding of the molecular mechanisms that cause the high level of activity.

Anders Bach hopes that the new compound can form the basis for a new drug on the global market, but he emphasises that such a process is long and complicated:

"Although we are very satisfied with the new results in terms of the possible treatment of brain damage due to stroke, many things can go wrong in the long drug development process. So even though the compound binds effectively in laboratory studies and shows promising biological activity in animal models, we will still have many challenges to overcome," concludes Anders Bach.

The PSD-95 protein is also involved in chronic pain as well as Alzheimer ’s disease – so the new compound may also prove interesting to examine in connection with other conditions.

Read the article in PNAS here

When damaged by stroke, the brain releases large amounts of glutamate, an activating signal compound, all at once. In turn this overactivates the receptors in the surrounding healthy tissue, causing the level of calcium in the cells to rise dramatically.

A (too) high level of calcium in the cell activates the enzyme nNOS, which forms the compound nitrogen-oxide. Nitrogen-oxide is extremely toxic in large amounts, and a direct connection has been proven between the overly high activity of the NMDA receptor, the release of nitrogen-oxide and brain damage.

Using chemical compounds to inhibit the interaction between the NMDA receptor and the protein PSD-95 can disrupt this toxic chain reaction.