Aggressive infections in hospitals are an increasing health problem worldwide. The development of bacterial resistance is alarming. Now a young Danish scientist has found a natural substance in a Chilean rainforest plant that effectively supports the effect of traditional treatment with antibiotics.

PhD Jes Gitz Holler from the University of Copenhagen discovered in a research project a compound that targets a particular resistance mechanism in yellow staphylococci. The development of resistance in these specific bacteria is extremely rapid. Bacterial strains that do not respond to treatment have already been found in the USA and Greece. 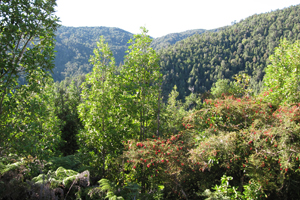 "I have discovered a natural substance in a Chilean avocado plant that is active in combination treatment with traditional antibiotics. Resistant bacteria have an efflux pump in their bacterial membrane that efficiently pumps out antibiotics as soon as they have gained access. The identified natural substance inhibits the pumping action, so that the bacteria’s defence mechanisms are broken down and the antibiotic treatment allowed to work," explains Jes Gitz Holler.

Jes Gitz Holler gathered specimens of the plant, which comes from the Persea family, in Chile, where the Mapuche people use the leaves of the avocado plant to heal wounds. The results have been published in Journal of Antimicrobial Chemotherapy.

The so-called MIC value is the lowest possible concentration of an antibiotic that inhibits the bacterial growth. With his compound from the medicine chest of the Mapuche people, Jes Gitz Holler can lower the MIC value by at least eight times:

"The natural compound has great potential and perhaps in the longer term can be developed into an effective drug to combat resistant staphylococci.  At this time there are no products on the market that target this same efflux-inhibitor mechanism. We want to improve the active substance using synthetic chemistry in the laboratory. That will also ensure sustainable production of a potential drug while protecting rainforest plants," continues Jes Gitz Holler.

Jes Gitz Holler emphasises that a commercial product will benefit the Mapuche people. At present there is a written agreement between the Faculty of Health and Medical Sciences and the representative of the Mapuche people, Alfonso Guzmán, PhD, who helped procure the plant material.

Bacteria are winning the race

Yellow staphylococcus – Staphylococcus aureus – is the most common cause of infection in wounds from an operation. However, the bacteria can be the cause of many diseases, from abscesses and food poisoning to life-threatening infections such as infective endocarditis and sepsis. The bacteria have been a major problem in hospitals worldwide since the 1940s, and up to now the drug industry has managed to develop new antibiotics in step with the increasingly aggressive behaviour of the bacteria. Unfortunately, that development appears to be turning:

"For all intents and purposes, the drug industry is not pursuing research into new antibiotics. It is simply too expensive relative to possible earnings, and there is more money in drugs to treat chronic diseases such as diabetes. Therefore, the bacteria are winning the race – resistance increases and treatment options are scarce. Research will have to find new paths and natural substances are one of them," emphasises Jes Gitz Holler.

People of the earth

The name Mapuche means people of the earth and they are the indigenous peoples of central and southern Chile. The Mapuche tribe has a long traditional for using natural medicine – up to 500 different plants are part of the Mapuche’s medicine chest.

Researchers from the Faculty of Health and Medical Sciences have been interested in South American folk medicine for many years. The hit rate is high – several of the plants show activity when tested in the laboratory. This is due to the long and proud tradition of folk medicine as well as the diversity of the rainforest – half of the plants in the rainforest are found nowhere else on earth.