A cancer diagnosis does not make young people religious

A sociologist of religion from the University of Copenhagen has interviewed 21 young patients diagnosed with a life-threatening cancer about their religious beliefs. She concludes that a cancer diagnosis will not make young people, who are not religious already, turn to religion. But it can confirm already existing beliefs.

"My research shows that young cancer patients' views on existential issues show consistency before and after the diagnosis: Their faith and their religious practices remain the same. However, the beliefs they already had can be confirmed and strengthened – this applies both to religion and science – so the patients may feel more strongly for the beliefs they had before they were diagnosed," explains sociologist of religion Nadja Ausker from the University of Copenhagen. 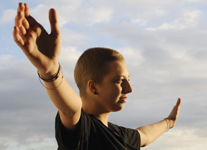 It has been a theoretical staple of sociology of religion that major religious conversions are preceded by personal crises; a person's feelings toward religion are significantly altered when confronted with an existential crisis such as a cancer diagnosis.

But Nadja Ausker challenges this theory with her thesis "Time for a change? Negotiations of religious continuity, change, and consumption among Danish cancer patients". In the thesis, she interviews 21 young cancer patients about the religious consequences of life crises, both shortly after the diagnosis and during treatmentt.

Nadja Ausker explains that a cancer diagnosis does not make young people lose their religion, just as atheists do not become religious:

"The cancer patients do contemplate existential issues, but that does not mean that they suddenly start praying or going to church if these religious practices were not already part of their lives. Several patients said it would be hypocritical of them to change practice and faith because of the diagnosis."

What the patients who already are religious find important, according to Nadja Ausker, is the availability of religious goods to choose from and consume as needed – just as one takes a pill or other medication. The patients become "consumers" of religious goods, and they pick the goods for immediate consumption, e.g. prayer or attending a church.

Nadja Ausker's PhD thesis is a collaboration between the University of Copenhagen and the largest Danish hospital, Rigshospitalet. It is based on 40 interviews with 21 cancer patients under the age of 40 diagnosed with leukemia or lymphoma.  The interviews were conducted 1-6 months and 12-18 after the diagnosis.

Nadja Ausker defended her thesis 12 October 2012 at the Faculty of Humanities, University of Copenhagen.