Antibiotic resistance is a growing problem in several African countries. One of the main problems is the very uneven quality of medicine, which makes it difficult for health professionals to prescribe correct doses of medication. To tackle this challenge, a Ghanaian PhD student at the University of Copenhagen has developed a new chemical analysis technique that provides fast and reliable determination of the exact contents of a drug.

"In Ghana, you cannot be certain that a treatment contains the concentration of active drugs stated by the declaration, or demanded by the health authorities. This often leads to incorrect doses of medication and repeated treatments - which may lead to antibiotic resistance. When bacteria constantly are exposed to low doses of antibiotics, the bacteria are not killed but instead develop resistance," explains Samuel Oppong Bekoe, a PhD student at the Department for Pharmacy and Analytical Chemistry at the University of Copenhagen.

Besides the problem with the official medical treatments, the unauthorized drugs pose another great risk.

"In Ghana there is a big market for illegally imported drugs of poor quality, which are sold to patients outside the official health system. T 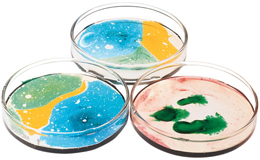 his contributes to the increasing bacterial antibiotic resistance because the patients receive wrong treatment," says Samuel Oppong Bekoe, who himself is from Ghana.

As a response to the growing problem of antibiotic resistance in Ghana the PhD student has developed an analytical chemical technique which can quickly identify the concentration of antibiotics in a drug and thereby improve the options for treatment.

The aquatic environment is contaminated with antibiotics

The newly developed analytical technique will be used to perform routine quality checkups of the 13 most commonly used antibiotics in Ghana. But it can also be used for environmental investigations.

"Drugs discharged into the environment are a problem in many parts of the world. The antibiotics are spread in nature through urine from animals and humans, and may unfortunately have a very long life span. The problem is great in many African countries due to poor sanitation conditions - especially in many rural districts," says Samuel Oppong Bekoe.

"Antibiotics released into the environment may be spread through plants which later are consumed by humans, or by livestock. In some local markets in Ghana, 30 to 90 percent of the meat sold contains antibiotic resistant bacteria. The consequence is that relatively harmless diseases such as diarrhea caused by resistant coli bacteria or salmonella bacteria become dangerous or even lethal. This is a vicious circle and we must break it."

Samuel Oppong Bekoe is looking forward to using this new knowledge and technology in his home country. The project, ADMER, is supported by DANIDA - Denmark's development cooperation at the Ministry of Foreign Affairs.

The project includes six African PhD students from Ghana studying at three different faculties at the University of Copenhagen: The Faculty of Pharmaceutical Sciences, the Faculty of LIFE Sciences and the Faculty of Health Sciences.

The research results were presented on 23 - 26 August in Copenhagen at the scientific conference EmCon 2011 - Occurrence, fate, effects, and analysis of emerging contaminants in the environment.

Antibiotic resistance is increasing world-wide with serious consequences for complications and mortality of hitherto treatable infections, and the main reason is misuse of antibiotics.

In the research project ADMER, six PhD students from Ghana work to stop the growing problem of antibiotic resistance in Ghana. ADMER is supported by DANIDA - Denmark's development cooperation at the Ministry of Foreign Affairs.

ADMER - Antibiotic Drug use, Monitoring and Evaluation of Resistance in Ghana (ADMER)