The University of Copenhagen, the Technical University of Denmark, Aarhus University and Aalborg University have, together with three companies, received the largest grant ever awarded by the Danish National Advanced Technology Foundation. The funds will be used to establish a national technology platform that will facilitate the mapping of the Danish genome. The first goal of the newly established centre will be to develop vaccines against cancer. 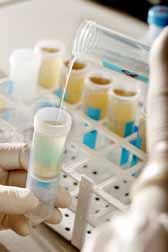 The four universities, together with Bavarian Nordic A/S, Beijing Genomics Institute Europe A/S and Genomic Expression ApS, will use the five-year DKK 86 million grant from the Danish National Advanced Technology Foundation to open and operate the new research centre called the Danish Platform for Large-scale Sequencing and Bioinformatics. The universities and collaborating organisations will contribute DKK 84 million, bringing the Centre’s total budget to DKK 170 million.

The Centre’s broad international perspectives have the potential to establish Denmark as a leader in genome research.

“We want to gather the best bioinformatics and genome researchers in one place in order to create a genome sequencing centre of the highest international standard,” says University of Copenhagen Prorector Thomas Bjørnholm, who led efforts to secure the funding.

“Our vision is to create a Danish gene sequencing and bioinformatics facility that will allow us to map Danes’ genes. We hope that it will be possible to identify who is at risk of developing diseases like cancer. One of the goals is to create a vaccine against cancer.” 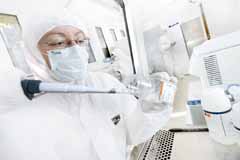 “The grant from the Danish National Advanced Technology Foundation makes it possible for BGI Europe to be established in Denmark. This has an enormous impact on disease prevention research and the University’s collaboration with the drug and food industries,” Bjørnholm says.

To projects in one platform

Linking the Danish population study and the genome project gives a unique platform for researching the impact of hereditary factors on illnesses. The research will also aid in the development of individual dietary and medicinal recommendations.

The centre will carry out two integrated projects:

“The pathogen project is a unique and exciting opportunity to break ground in cancer research by using the basic research that my team has done,” Professor Willerslev says.

In addition to being the first to map the genome of a pre-historic human, Willerslev’s team recreated a prehistoric ecosystem in a spoonful of earth and discovered the world’s oldest life form, a 500,000 year-old bacteria that lived in Siberian permafrost. Willerslev received the Danish Ministry of Science, Technology and Innovation’s Elite Researcher award earlier this year.

“Establishing the national sequencing platform gives Denmark the chance to make a name for itself when it comes to genome research, and the close collaboration with BGI will be invaluable in this work,” says Professor Kristensen, who has worked with BGI for a number of years.

“The information yielded by the pan-genome will open the door to more ambitious projects that can use the one-of-a-kind database and blood bank to gain valuable insight into Danish DNA and prepare the ground for development of individual treatments and prevention strategies.”

The Danish National Advanced Technology Foundation awarded the grant based on an application submitted by Prorector Bjørnhom together with Prorector Søren E. Frandsen, Aarhus University, and Prorector Anders Bjarklev, Technical University of Denmark.

A number of Denmark’s leading genome scientists will be associated with the centre. They include:

Read more about the organisations involved in the project on the website of the Danish National Advanced Technology Foundation.

The National Advanced Technology Foundation is an independent, state-funded organisation that co-finances advanced research and innovation initiatives. The goal of the foundation is to promote growth and employment. It focuses its efforts on nanotechnology, biotechnology and information technology. Read more.