New piece to the puzzle of brain function

Researchers at the Faculty of Pharmaceutical Sciences at the University of Copenhagen have collaborated with the company NeuroSearch to generate new knowledge about an important part of the brain’s complex communication system. The discovery could form the basis for future development of better medicines for patients with psychiatric disorders. The results were recently published Journal of Neuroscience. 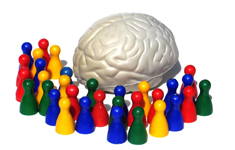 New knowledge challenges established scientific ideas about the function of the nicotinic acetylcholine receptors, which play an important role in the health of the brain. As its name suggests, the class of receptors is significant for the effects of nicotine and is linked to addiction – however, life-threatening conditions such as Alzheimer’s and Parkinson’s disease are also linked to the electrical impulses that are mediated by nicotinic acetylcholine receptors.

“Brain function is a gigantic puzzle, and one could say that we have found and documented a new and important piece. Within the family of nicotinic acetylcholine receptors exist various subtypes. We show – in short – that on the most common subtype there are no less than three binding sites instead of the two which science has hitherto known,” says Associate Professor Thomas Balle, an associate professor at the Department of Medicinal Chemistry, University of Copenhagen. Balle has, in collaboration with Postdoctoral Fellow Kasper Harpsøe and researchers at the company NeuroSearch, discovered the previously unexplored corner of the otherwise well-known receptor.

“The results are first and foremost interesting from a basic scientific point of view. We change the entire conceptual understanding of the receptor, so to speak, and it appears to be a general mechanism that applies across the receptor family. We are expanding the foundation of knowledge in this area, as it were,” Balle says.

“At the same time the new binding site is interesting from an application perspective – when the brain is activated via the new binding site, a stronger impulse is simply sent through the receptor’s ‘lock’, and this leads to entirely new and exciting opportunities in future drug development.”

Potential for improvement of psychoactive drugs

The nicotinic acetylcholine receptors are structurally similar to the GABAA receptors, which also play an important role in pharmaceutical chemical brain research. Benzodiazepines for insomnia and anxiety attacks constitute a class of well established drugs that act by modulating the GABAA system. The scientists believe that they have discovered the nicotine equivalent of a benzodiazepine binding site.

“It is likely that the discovery will form the basis for the development of better medicines for psychiatric disorders in the future – because the combination of a mechanistic and a structural understanding of the receptor is a very good starting point for structure-based design of drugs that act via the new binding site,” Harpsøe says.

Collaboration with the industry

The new research results were achieved in close collaboration with NeuroSearch – a European-based biopharmaceutical company specializing in diseases of the central nervous system (CNS).

“All the experimental work is conducted at NeuroSearch with manager Philip Ahring acting as the head person. The laboratory work is inspired by structural models developed in our research group at the Faculty of Pharmaceutical Sciences. In order to fully understand the new binding site, we have performed numerous mutation studies and electrophysiological measurements, and in every way it has been a great working relationship with full openness and the opportunity for exchange of ideas - very rewarding for both parties,” Balle says.

Read abstract of article recently published in Journal of Neuroscience.