The incidence of malaria in many African countries south of the Sahara is falling rapidly. A Danish-Tanzanian research group has discovered that the mosquito carrying the malaria parasite has practically disappeared from villages without organized mosquito control, and the researchers do not know why. There are several hypotheses but without proper data they cannot say whether malaria is being eradicated or whether it is just resting up before returning with renewed vigour.

"Many of our fellow malaria researchers think that the fall in countries such as Tanzania, Eritrea, Rwanda, Kenya and Zambia shows that all the control programmes are working, particularly the use of mosquito nets," says Associate Professor Dan Meyrowitsch from the Department of Health Services Research at the University of Copenhagen, and continues:

"That just isn't the whole story. For more than ten years we have been collecting and counting the number of mosquitoes in Tanzanian villages. The number in our traps fell from 5300 in 2004 to just 14 in 2009, and these were from villages without mosquito nets." 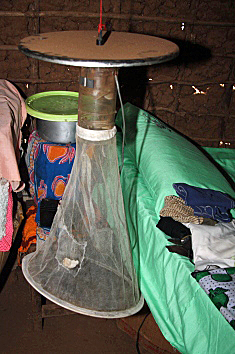 The researchers catch the mosquitoes in
these nets and suck them out using their
mouths.
FOTO: GSCH.

When will they be back?

Dan Meyrowitsch explains that the 99 % fall in the malaria mosquito population during the end of the 1990s seems to be connected to a fall in precipitation. This may be due to global climate changes.

"From 2003 to 2009 the volume of precipitation was more stable, but the rain was more chaotic and fell outside the rainy season. And this may have disturbed the natural cycle of mosquito development," he says.

"Of course it is great that the number of malaria-related fatalities among children has fallen drastically in the last five or six years, but we need to know why!"

Since the researchers can discount mosquito nets, the question is whether the mosquitoes have succumbed to disease, or communities have been using pesticides, or whether the fall is due to the chaotic new precipitation patterns.

"Unless we find the answer we will not be able to predict when the malaria mosquitoes will come back, and that could rapidly prove critical," Dan Meyrowitsch explains.

Many years of no malaria means a loss of immunity

Many children and adults have not been exposed to malaria in the last five or six years, and so have lost or failed to develop immunity to the parasite.

The captured mosquitoes are dissected to
see if they carry the malaria parasite.
FOTO: CSGH.

When the mosquitoes suddenly come back this may mean dramatic malaria epidemics with many fatalities unless the population and the health authorities are ready for them.

The study is funded by the EU, DBL - Center for Health Research and Development, and The Consultative Research Committee for Development Research, Ministry of Foreign Affairs, Denmark. It was conducted in close cooperation with researchers from the National Institute for Medical Research in Tanzania.

The study: Is the current decline in malaria burden in sub-Saharan Africa due to a decrease in vector population? is published in Malaria Journal.