Researchers at the Faculty of Pharmaceutical Sciences, University of Copenhagen, have examined a number of plants which are used for illegal abortions in Tanzania. The lab tests show that several of the plants can make the uterus tissue contract and that the plants therefore can be used to stop lethal bleedings after birth. This new knowledge is now to be conveyed in rural Tanzania where access to medicine often is difficult.

Every year around 350,000 women die globally due to post partum bleedings - blood loss during child birth. On the African continent, one in 16 women die during their pregnancy and in some countries the number is as high as every eighth woman. The reason is poor access to medical assistance often because the women either lack money or because they live to far away. The knowledge about herbs, which can help the uterus contract after childbirth is therefore often the only life saving opportunity in remote rural areas. 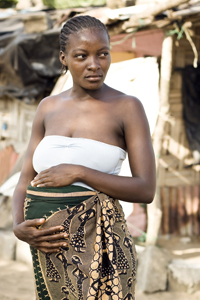 Danish researchers have therefore tested 22 abort inducing plants in the lab on rat tissue, and several of the plants had close to the same effect as the control drug acetylcholin.

“Half of the plants we tested made the uterus tissue contract strongly whereas 11 of the extracts induced contractions with short intervals. Seven of the plants worked in both ways,” explains Associate Professor Anna K. Jäger from the Department of Medicinal Chemistry at the University of Copenhagen.

Anna K. Jäger is Ethno Pharmacologist, which means her research is founded in the meeting with different cultures’ traditional healers and she investigates whether the traditional medicine contains active drugs that have a proved effect on diseases.

Conveying the message into every corner

These research results will now be used for health promotion in Africa, and for this the researchers are planning a series of information seminars in the organizations of traditional healers and birth attendants in Tanzania. In Tanzania abortion is illegal and this brings the pregnant women to the traditional healers.

Through interviews with local birth attendants, the Danish doctor Vibeke Rasch from Odense University Hospital has learned about 22 plants, which are used by women who do not have access to abortion in the hospitals. Two of the collected African plants are placed in the vagina and the others are taken as a tea or a plant extract.

With the project People and Plant Medicine, researchers investigate whether the plants used in traditional medicine has pharmacological effects making the plants suitable for medicine. It is important to identify the plants which work, but also to sort out the ineffective and harmful plants. The goal of the project is to share this knowledge with the practitioners and users of plant medicine in as many local African societies as possible.

The laboratory work is done in collaboration with Associate Professor Uffe Kristiansen from the Department of Pharmacology and Pharmacotherapy.

The traditional birth attendants in Tanzania often suggest mixing two or three plants and researchers believe there is good reason to do so.

As for an example mixing an extract of the three herbs Obetia radula, Rubia cordifolia and Zehneria scabra of which the first two increases the force of contractions and all three herbs shorten the intervals between contractions.

COVID-19 May Have Consequences for Mental Health