HIV/AIDS is a major problem in Sub Saharan Africa. The South African plant, Tulbaghia can soothe one of the recurrent problems patients often face, oral fungal infections, but unfortunately the plant causes very bad breath putting the users in risk of social stigma. A student at the Faculty of Pharmaceutical Sciences, University of Copenhagen, now looks for odourless chemistry in the plant's genealogical tree.

"70 percent of people living with HIV/AIDS live on the African continent and more than 20 percent of the population in seven African countries are infected by the virus. It is a humanitarian catastrophe and lack of medicines in the poorest areas makes this situation even worse," says pharmacy student Mette Wikkelsø. She is currently writing her Master's thesis at the Department of Medicinal Chemistry.

Among the poorest population in Africa, natural products, e.g. herbs are often 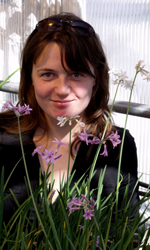 the first choice to combat diseases. The plant Tulbaghia, which resembles garlic, is among other things used to treat fever, colds and stomach trouble. When the immune system is weakened the patients are more receptive and vulnerable to fungal infections which the body normally would be able to fight.

"The Tulbaghia plant has been part of an investigation at the University of KwaZulu-Natal in South Africa where researchers looked for a cheap and effective treatment for HIV/AIDS patients' fungal infections. 24 local plants were tested and two members of the bulbous plant family - Garlic and Tulbaghia proved to have positive effects," explains Mette Wikkelsø.

Unfortunately, these two bulbous plants also have such a strong smell that the South African researchers fear it will increase the social stigma of being an HIV/AIDS sufferer.

"HIV/AIDS patients are already exposed to social stigma and it will make it even worse if the patients also suffer from a strong, ill smelling breath," says Mette Wikkelsø, who at the moment is working in the lab to investigate the Tulbaghia plants' close relatives. The goal is to find a potent plant without the unpleasant smells which both can help the African patients and be part of her Master's thesis project. The plants she is analyzing have been collected in South Africa in collaboration with the University of KwaZulu-Natal.

"I am testing many different plant extracts on four different bacteria and one fungus to investigate if the positive effect comes from the ill smelling substances or if I can isolate a beneficial odeurfree substance. Besides this I am also mapping the relationship between the different kinds of Tulbaghia in order to see if the plants' relationship and chemical content is connected," tells Mette Wikkelsø.

The African natural drug plant Tulbaghia is a so called Alliaceae specie. The Alliaceae is a bulbous plant family consisting of 73 genera and 1605 species - leeks also belong to the Alliaceae plant family.

Throughout history plants have been the essential source to medicines and today a quarter of all new drugs that are registered globally come from plants or other natural resources. The plants have such a great potential because they through evolution have developed many kinds of advanced defense mechanisms to avoid being eaten or attacked by diseases. These biological active defense substances can in some cases be put into good use in the development of new drugs.

The project has been realised in collaboration with researchers at The Botanical Garden and Museum - Natural History Museum of Denmark.