On 13 May the University of Copenhagen appoints world famous American author Paul Auster honorary alumnus. Auster receives the honorary title in recognition of a remarkable body of work that attracts general readers as well as academics in great numbers, but also for the special connection he has formed with his large Danish audience: Auster has released six of his novels in Denmark in advance of their publication in English. 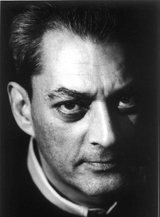 When Rector Ralf Hemmingsen appoints internationally acclaimed American writer Paul Auster honorary alumnus at a ceremony in University of Copenhagen’s Ceremonial Hall, he will be the first foreign-language novelist to receive the honours.

With the nomination, Paul Auster joins a select group of 10 honorary alumni, including Richard Levin, President of Yale University.

- We are very pleased that we as a university are able to tie bonds with an author like Paul Auster. It is important that academic institutions such as the University of Copenhagen recognize people with extraordinary talent who contribute to creative and innovative practices in society and at the university, Rector Ralf Hemmingsen says.

Danes get to read Auster before everybody else

- Danish readers have truly embraced Paul Auster whose novels, for the past 20 years, have had a wide and steadily growing audience in Denmark;  they are sold in book clubs and studied in high schools and universities. But Auster himself has also made a considerable effort to form a special relationship with Danish readers by visiting Denmark regularly and by releasing six of his novels in Danish translation in advance of their publication in his own mother tongue, associate professor Inge Birgitte Siegumfeldt points out.

It was Inge Birgitte Siegumfeldt who recommended Paul Auster for the alumni honours.

- I do not know why Auster has formed this unique relationship with Denmark, but it is a question I will certainly ask him when I interview him during the nomination ceremony.

Associate professor Inge Birgitte Siegumfeldt has taught many courses on Paul Auster’s work at the University of Copenhagen over the years. She believes that it is Auster’s ability to capture modern man’s search for identity and meaning in fundamentally gripping narratives that has made him an essential literary voice.

- Very few authors possess Auster’s talent for presenting complex subject matter in such a thrilling fashion. In many novels, he taps into popular genres such as detective fiction and the thriller, which makes his stories exceedingly engaging.  But at the same time he challenges his readers when the novels’characters –or even the narratives themselves – question the ability of language or literature to represent reality or create meaning, Inge Birgitte Siegumfeldt explains.

- The philosophical discussions of what language and literature mean to us as human beings make Auster’s work highly interesting in an academic context, but they do not deter the so-called general readers who devour the books in great numbers. And that is precisely because Auster possesses the rare gift for making complex subject matter exciting and relevant.

About the honorary alumnus title

Only 10 other people have been appointed honorary alumni of the University of Copenhagen. Honorary alumni must have made an exceptional contribution to their particular field or to the university and have acquired considerable international standing.

- Just as the humanities scholars here at the University of Copenhagen, Paul Auster is interested in what it means to be a human being in a multifaceted and often chaotic world. And, in his own way, he does exactly that which any university strives to do – he innovates, asks difficult questions and communicates his insights, Rector Ralf Hemmingsen concludes.

When the University of Copenhagen confers the honorary alumnus title on a person, it also makes sure to invite him to future events at the university and to make an effort to maintain the lasting relationship that such a title implies.

13 May from 12.45, you can follow a webcast of the appointment of Paul Auster as honorary alumnus at the Universty of Copenhagen live from the university's Ceremonial Hall.