Researchers at the University of Copenhagen have explored the active principles of a Danish mushroom and found that some of the substances it contains are particularly toxic towards cancer cells. The goal is to synthesise and refine substances in the mushroom that may be useful in future drug development.

Asia has a long and proud tradition of using folk medicines based on natural products. Many substances found in fungi are today registered as drugs to support chemotherapy treatments for cancer – among others, the mushroom Lentinula edodes (commonly known as Shiitake), which is the primary ingredient in a registered drug extract on the Japanese market. 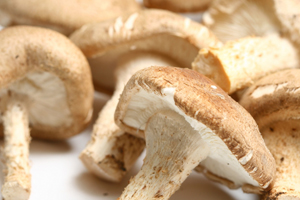 “Dr. Ming Chen, a Chinese–Danish physician and specialist in Chinese folk medicine, has discovered a Danish mushroom which contains toxins that are especially effective against cancer cells. The Faculty of Pharmaceutical Sciences has investigated the mushroom’s chemistry and, based on the substances isolated from it, we are developing a refined chemical compound that is even more effective and selective,” says Søren Brøgger Christensen, Professor of Natural Products Research at the Faculty of Pharmaceutical Sciences.

The project has received DKK 2.6 million in financial support from Protech Investment Ltd – a spin-off company from a large Chinese producer of natural medicines.

Traditional medicines derived from natural products are often based on the experiences of several generations of shamans. Consequently these inherited experiences are eminent sources of information in the hunt for new active ingredients with potential for drug development. In Denmark, mushrooms have primarily been used in food preparation, while some species have been used as intoxicants. However, they have been largely absent within Danish folk medicine.

This lack of folk knowledge led Dr. Chen, a senior physician at Sønderborg Hospital, to begin screening poisonous Danish mushrooms. After an intense search, he discovered a particular mushroom that is significantly more toxic towards cancer cells than benign human cells. At the Faculty of Pharmaceutical Sciences, exchange student Xuemei Liu, also from China, isolated the active principles:

“This is a completely new class of natural compounds, which makes the research results unique,” explains Christensen, who has been collaborating with Chen since 1990, when they were both members of a research group that worked on developing an anti-malaria drug based on an active principle found in Chinese liquorice root.

When an interesting natural substance is discovered, it must go through a development process, in which researchers try to produce new compounds that allow for the proper selectivity in the body and therefore have minimal side effects.

“We were able to isolate the mushroom’s active principles and determine their chemical structures. The natural compounds are not useful in themselves because their complex structure means that they cannot be synthesised in a commercially viable manner. The problem with sustainable production of the active substance is further complicated by the fact that tissue of the mushroom – if it is grown from a cell culture – does not produce the active molecule. Therefore, we attempt to produce simple and effective analogues – that is, new compounds that have fine-tuned the effects – so that a simplified molecule carries the same promising properties with regard to combating cancer cells. In this manner we use nature as an inspiration for synthetic chemistry,” Christensen explains.

He emphasises that, as with all new drugs, using the results to develop a viable product will be a long, difficult process.

“Even though there is a wealth of medicinal mushrooms on the Asian market, it is unfortunately not possible to transfer Chinese folk medicine directly to Denmark. One problem is that the active principles in mushrooms are often tested in combination with forms of chemotherapy that we do not use in Europe,” Christensen says.

‘Medicinal mushrooms’ is a general term for mushrooms that can be used in the treatment of diseases. More than 200 species of mushrooms with different effects against diseases have been identified and studied, especially in Japan and China. Research indicates that some of these mushrooms contain substances that can prevent cancer or contribute to its treatment. One particular area of interest for researchers is the mushrooms’ long chains of carbohydrates (polysaccharides), which can affect the human immune system and potentially increase its ability to resist disease. 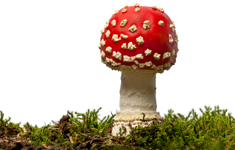 Another Danish mushroom has long been a focus of medicinal chemistry research. Siberian shamans have a tradition of ingesting Amanita muscaria (commonly known as fly agaric) in order to achieve a trance-like state.

Researchers at the Faculty of Pharmaceutical Sciences have been investigating the secrets of fly agaric for years. The hallucinations are caused by toxins in the mushroom that affect the central nervous system.

In the 1970s, researchers identified several of these toxins. One of them, muscimol, affects a receptor system in the brain that is involved in a range of processes related to anxiety, memory formation, sleep and consciousness, as well as motor control.

Researchers ‘tamed’ muscimol by synthesising a model substance that had the chemical’s beneficial characteristics, but not its toxic side-effects. The substance was given the name THIP.