Three of the world’s leading researchers were awarded the UNESCO Niels Bohr Gold Medal today for their special contribution to groundbreaking research in physics. The three researchers are John Pendry from Imperial College in London, Professor Timothy Berners-Lee from MIT, Boston and Professor Kip S. Thorne from Caltech, Pasadena. All three are Nobel Prize class researchers. 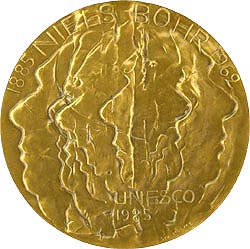 UNESCO is the United Nations organization for education, culture and science and works to promote peace and education in the world. The UNESCO Niels Bohr Gold Medal was established in 1985 to commemorate the centenary of Niels Bohr’s birth and was given out in 1998, 2005 and now in 2010.  The medal is awarded to researchers who have made outstanding contributions to physics – research which, furthermore, has or could have a significant influence on the world.

The Gold Medals are provided by Director-General of UNESCO Irina Bokova and handed out at Royal Danish Academy of Sciences and Letters in Copenhagen, where the Minister for Education Tina Nedergaard and UNESCO Deputy Director-General Getachew Engida will present the medals.