For the first time ever, a completely man-made chemical enzyme has been successfully used to neutralise a toxin found naturally in fruits and vegetables.

Proof of concept for artificial enzymes 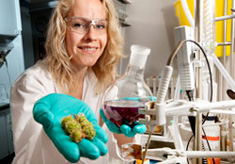 While studying for her PhD in chemistry at the University of Copenhagen Jeannette Bjerre showed how a novel so-called chemzyme was able to decompose glycoside esculin, a toxin found in horse-chestnuts.

Chemzymes are designed molecules emulating the targeting and efficiency of naturally occurring enzymes and the recently graduated Dr. Bjerre is pleased about her results.
"Showing that these molecules are capable of decomposing toxins required vast amounts of work and time. But it's been worth every minute because it proves the general point that it's possible to design artificial enzymes for this class of task", explains Bjerre.

Most people know enzymes as an ingredient in detergents. In our bodies enzymes are in charge of decomposing everything we eat, so that our bodies can absorb the nutrients. But they also decompose ingested toxins, ensuring that our bodies survive the encounter.
In several important aspects artificial enzymes function in the same way as naturally occurring ones. But where natural enzymes are big and complex, the artificial ones have been pared down to the basics.

The flat-nosed plier of the molecular world

One consequence of this simplicity is that designing chemzymes for targeted tasks ought to be easier. With fewer parts, there's less to go wrong when changing the structure of chemzymes. And for enzymes as well as for their artificial counterparts even small changes in structure will have massive consequences for functionality.
In this, enzymes are very much like hand-tools, where scissors and flat nosed pliers, though almost identical, have very different duties.

Even though naturally occurring enzymes are several orders of magnitude smaller than flat-nosed pliers, they are still unrivalled tools. Some of the fastest chemical reactions blast off when enzymes are added to the broth.
Several known enzymes in the body catalyze more than one million reactions per second when they decompose compounds. There's just one drawback to enzymes. They are extremely fragile.
If an enzyme in our body was to be warmed above sixtyfive degrees centigrade or subjected to organic solvents, they would immediately denature. They would unravel and stop functioning.

So far no one has succeeded in designing chemzymes that are anywhere near as fast as their naturally occurring cousins. But they are far more resilient.
Manmade enzymes take on heat and solvents without batting a molecular eyelid. One of the consequences of this is that chemzymes can be mass-produced using industrial chemical processes. This is a huge advantage when you need a lot of product in a hurry.

Producing natural enzymes in industrial settings is considerably more time-consuming because they have to be grown. Rather like one grows apples or grain.
So the robust and designable compounds may turn out to be just what's needed for a wide variety of jobs. Not least in the pharmaceutical industries, where the need is massive for chemical compounds which can solve problems that no amount of designing could ever tweak the natural ones to work on, which are unaffected by industrial processes, and to top it of, cheap to produce.

Read more news from The Department of Chemistry here.