Secrets of the pea aphid unveiled

Aphids are serious agricultural pests, not only because they consume plant saps, but also because they transmit plant diseases that destroy all kind of crop plants. A large international research consortium with the participation of a research group around Professor Cornelis Grimmelikhuijzen at the University of Copenhagen has now sequenced the genome from the pea aphid Acyrthosiphum pisum. This work, which was published in the high impact factor journal PLoS Biology this week, will enable researchers to better understand molecular processes occurring in aphids. This improved understanding of aphids will eventually lead to the prevention of aphid attacks on crop plants and the transmission of aphid-born plant diseases.

Facts about the project 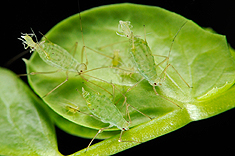