How does an obesity operation cure type 2 diabetes?

An operation in which a knot is tied in the gut resulting in considerable weight loss in obese patients also cures diabetes in just twenty four hours. That is long before the patient has lost his or her excess weight. Michael Taulo Lund, a PhD student at the Faculty, is conducting a study to find out just how an operation can cure an otherwise incurable disease.

Diets are a waste of time

Research shows that if your body mass index (BMI) is over 35, dieting is ineffectual. Your obesity has become chronic and the prospects of lasting weight loss are very poor indeed.

If your BMI is over 35, you've been diagnosed with diabetes, and you are over 40 years old, you may be eligible for an obesity operation. This operation aims to bypass most of the stomach and small intestine, sending food directly down the colon. The results are striking: patients lose some 60 or 70 per cent of their excess weight.

An unintended side-effect is that patients are also cured of type 2 diabetes in just 24 hours. "We don't know why this happens," says Michael Taulo Lund from XLAB at the Faculty of Health Sciences, and so is carrying out a research project to monitor a group of obese patients before and after the operation. He wants to explain how this surgery affects an otherwise incurable disease.

Obesity weakens the effect of insulin

"The vast majority of type 2 diabetics are overweight," explains Michael Taulo Lund. "The insulin needed to guide the blood sugar into the muscles begins to work badly when you are heavily overweight. As long as there is too much sugar in the blood after a meal, which is of course how we define diabetes, the pancreas must slave away in an attempt to direct the sugar into the muscles, tissue and organs. If this situation is not regulated, the pancreas finally gives up and is unable to produce insulin any longer. Once that happens, it becomes less likely that obesity surgery will be able to cure the patient's diabetes. But if the operation is carried out before that stage is reached, in no time at all the patient is almost always cured of diabetes".

How the body reacts to insulin during weight loss 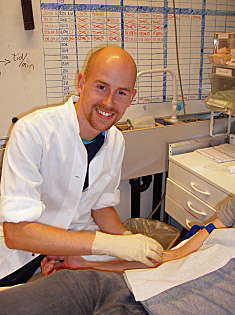 "We are monitoring morbidly obese patients with and without diabetes," continues Michael Taulo Lund. "This will tell us whether there is a difference in the way their bodies react to the operation".

"We know that losing weight helps type 2 diabetics. But obese diabetics are cured of type 2 diabetes so soon after surgery that they have not yet started losing weight. What is the explanation for this? Fundamentally, what is it that gives them normal blood sugar levels?"

"We have observed that the operation means that they begin to secrete more of the digestive tract hormone GLP1 after meals, and this affects the satiety centre in the brain while stimulating the pancreas to produce insulin. This happens immediately after the operation. Then the patient begins to lose weight too, and his or her body needs less insulin, while becoming more sensitive to it. That at any rate is my hypothesis and is what we are now going to investigate".

"Researchers know that the obese and overweight are generally insulin-resistant. Even though they may not actually have diabetes yet, there is a kind of resistance to insulin in their muscle cells. Muscle is also not the only thing that affects insulin sensitivity. Fatty tissue does so too, for reasons as yet unknown.

"There is often inflammation in fatty tissue in the obese. We are also investigating the adipokines associated with systematic inflammation in fatty tissue. Perhaps it is these adipokines that affect the ability of the muscles to react to insulin? Or perhaps the reaction to insulin is because overweight patients have more fat in their muscle tissue?"

"The study, for each patient, will last approx. 1½ years, while the entire research investigation is expected to take 3 years. We will start when the patients have been approved for surgery and have agreed to take part in our study. We interview the subjects and carry out the initial measurements and tests. Then we see them again just before surgery, when they will have lost 8 per cent of their body weight. This is a requirement for the study in order to reduce some of the fat from the liver, which is otherwise so large that it covers the stomach entirely. Then we do the second round of tests and measurements."

"These procedures have been carried out in other studies too. What is new about ours is that we will see them again 4 months after the operation when they have lost 10 to 15 kilograms and continue to lose weight. They will still have an energy deficit at this point and we are interested in investigating how this affects the body compared to their weight loss prior to the operation. Are there any differences?"

"We then see the patients for the last time 1 - 1½ years after surgery when they report that they have stopped losing weight. We will be able to see whether surgical weight loss is as good as weight loss through dieting or exercise and how the process has affected their ability to diet and exercise. Have the cells in their bodies changed in some way, and if so, why?" Michael Taulo Lund explains that one reason why it is so hard to lose weight by dieting may be that your body becomes more efficient when you have an energy deficit, something the body perceives as starvation."

The study is entitled GASMITO - Metabolic effects of bariatric surgery: Studies in morbidly obese with or without type 2 diabetes. Besides Michael Taulo Lund, PhD supervisor Professor Flemming Dela is participating in the project as is Associate Professor Jørgen Wulff Helge and Post Doctoral Student Martin Mogens (both from XLAB), Professor Karsten Bech from the departments of surgery at Køge and Roskilde Hospitals, and Consultant Michael Støckel from the Bariatric Center.