A new PhD thesis by Anders Hastrup provides a voice for the countless, silent victims of civil war and conflict, the refugees. Anders Hastrup has just been appointed director of The Danish Institute in Damascus. 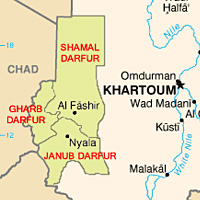 In the thesis 'Voices From Darfur. Reclaiming Sudanese History', Anders Hastrup allows the refugees of the civil war in Darfur to share both their horrific experiences, as well as their stirring belief that the conflict can be resolved and that they can one day return home.

Today, there are around a quarter of a million refugees from Darfur located in camps in eastern Chad. During the spring of 2009, Anders Hastrup collected an extensive amount of interviews that both enriched him as a human being because of the significant people-to-people encounters, as well as changed his view of what is at stake in the Darfur conflict:

- "What I discovered through my work with the interviews was that there are several, concurrent stories about Darfur and the on-going civil war - and therefore there are as many possible solutions to conflict! The refugees put into words how they feel let down by the international community, which no longer pays attention to the conflict in Darfur", says Anders Hastrup, a PhD. in Middle Eastern studies from The Faculty of Humanities at the University of Copenhagen.

Through the interviews, Anders Hastrup shows how the inhabitants of the refugee camps recreate Darfur's history from their involuntary exile. As limited as the camps may be, the thesis describes them as creative spaces where perceptions of the Darfur conflict, its causes, key players, and possible future solutions are constantly discussed.

The thesis does not attempt to tell 'the true story' about the reason for the war in Darfur, but it combines an anthropological and a historical view which suggests that the so-called 'deep listening' method is particularly well suited when researching the refugees' recreation of history. By analysing the different ways in which the refugees try to reclaim their history, as well as a place in Sudanese history, the thesis is a contribution to the understanding of some of the mechanisms behind the war in Darfur.

On 12 October, Anders Hastrup defended his PhD thesis, and on 18 October he took office as director of The Danish Institute in the Syrian capital of Damascus.

Visit the The Danish Institute's website for more information.