When the first semester of 2010 starts, the University of Copenhagen will come to include the best of Kierkegaard research. On this date, the Søren Kierkegaard Research Centre (SKC) will become part of the University's Faculty of Theology. One of the centre's new research projects relates Kierkegaard's writings to the contemporary practice of employee and manager coaching. 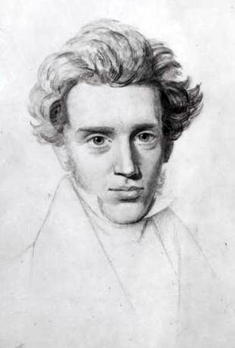 Over the past couple of years, Kierkegaard's name has cropped up on a host of business consultancy websites. Associate Professor Pia Søltoft, who conducts research at the Kierkegaard Centre, says there's nothing strange in that:

- "The phenomena of self-development and coaching reflect the fact that people today want help in their search for identity. A coach helps people to help themselves by asking questions rather than giving answers. We recognise this method from as far back as the ancient philosophers, and of course from Kierkegaard, who claims that the self is not only a gift but a lifelong task."

New meaning in times of crisis

Two of the Kierkegaard Research Centre's events in 2010 will be a workshop for business consultants on self-development in a Kierkegaardian perspective, and a conference on the management ideal of the future. Although the coaching trend arose during the financial upturn - which gave ordinary people time for self-examination - the recession has not killed off ideas of self-development but rather given them new life, says Søltoft:

- "Theories of self-development take on new meanings during slumps - both personal and commercial. The financial crisis has forced many people to redefine not just their job situation but their whole lives. Many have been forced to see themselves with new eyes and rediscover themselves in new ways. Kierkegaard says that to solve the task that is life, individuals must become aware of and accept their entire life story, which they have not created but which nonetheless has formed them: both the positive things that they are proud of and the negative things that they dislike. Kierkegaard's ideas can be seen as both a critique and correction of contemporary self-development theories, and the coaching culture that has emerged from them", Pia Søltoft adds.

The Søren Kierkegaard Research Centre is a Centre of Excellence that includes researchers of various ages from all around the world. Besides adding more researchers to the centre, the move to the Faculty of Theology will strengthen the centre's Kierkegaard courses. As a new initiative, the centre will offer interdisciplinary Danish- and English-language instruction as well as continuing and further education courses each semester.

The Dean of the Faculty of Theology, Steffen Kjeldgaard-Pedersen, welcomes his new colleagues:

- "Since 1994, the Søren Kierkegaard Centre has provided a framework for interdisciplinary Kierkegaard research, extensive publication, teaching, and collaborations with the business community. The centre's researchers are acknowledged throughout the world, so the centre's incorporation into the Faculty of Theology will greatly enrich the faculty's research environment, and naturally we're delighted to welcome it into the fold."

The centre's move will be celebrated on 11 February at the Faculty of Theology. All welcome. See the programme here (in Danish):
http://www.skc.ku.dk/arrangementer/indlejring/